As I noted two days ago, I have begun a series of “celebrity interviews” with people who aren’t actually celebrities but like to pretend to be.

(For the first Episode of The Famous Nobodies, click here.)

Today I am interviewing a young man by the name of Shawn. Grab your tea and popcorn, and lets get started!

Emily Smucker: What is your full name?

ES: What is your age?

ES: What is your official job title?

Mr. Graber, in the uniform that made him famous.

ES: What is your unofficial job title?

SBG: I’m also an HVAC apprentice, secretary, accountant, deliveryman, babysitter, and janitor. If I were to give myself an unofficial title, it would be Sir Myriad. For obvious reasons.

Shawn during one of his HVAC apprenticeship sessions.

ES: What is the most dangerous and/or illegal thing you have ever done?

SBG: I like to drive my car with my head sticking out of the sunroof. I’m tall enough that I can still reach the accelerator. And the brakes, too. I never drive very fast this way, because if I were to get rear-ended, it would most likely chop my head off. As for the other illegal things…we’ll just have to talk off-the-record sometime.

Obviously if there is someone behind you and you are afraid of getting rear-ended, the solution is to slow down.

ES: If you could re-do any event in your life, what would it be and why?

SBG: If this question was posed by Shelby, I would totally go back in time and not kick him in the head.

Which is funny only because Shawn’s brother Shelby is in Oregon right now, and suggested some interview questions. And yes, in case you were wondering, the whole family has names that start with “Sh.” I think it’s one of those celebrity attention stunts…

ES: Why do people climb mountains?

SBG: Since this article is all about me, I’ll change the question to “Why have you climbed mountains, Shawn?” And the answer is, “Because a whole pile of people wanted to do it and I went along for the ride.” Most of the mountains I ascend have handy ski-lifts installed on them.

ES: If I gave you three bucks to spend at the dollar store, what would you buy?

SBG: I don’t think I’ve ever been to a “Dollar Store.”

Are you KIDDING me? Never been do a DOLLAR store? That’s like saying you’ve never eaten a hotdog. Or never ridden a bicycle. Or never looked directly at the sun just because someone told you not to.

Let me introduce you, Mr. Culturally-Deprived Celebrity, to the wonders of the Dollar Store. In song form, obviously.

ES: Tell me one thing about yourself you wouldn’t want me to know.

SBG: There is a mole on my chest that has recently changed from an endearing light brown color to a scary, not-so-endearing red color. I’m sorta worried about it, and I should probably have it checked since I’ve read about moles and if they change size, color, texture, location, hair density, itchiness, etc, I am to notify a doctor or physician STRAIGHT AWAY. (I hope you’re happy, Ms. Smucker. You have brought this dreadful information upon yourself.)

ES: Do you like tea parties if they are manly enough?

SBG: BRING ON THE TEA! I’d totally dig a tea party. I like to dress up if what I’m dressing in cannot be described as “delicate” or “frilly”.

Yes, I will admit, that answer restored my faith in humanity. Much more so than the mole comment. Shudder.

ES: Who is someone that you Facebook stalk and wish you could meet?

SBG: There’s a dude named Dan McClanahan that I would love to meet. Him and his wife are photographers and they do excellent work, while also being the funniest couple alive.

I bet you were hoping I stalk GIRLS and want to meet them in real life. I am sorry to disappoint you.

Yep, pretty excellent work. They make newly-engaged couples look like bicycle-riding crime-fighting duos. If that isn’t “excellent work” I don’t know what is.

ES: What is the weirdest food that you love?

SBG: My roommate has gotten me hooked on barbecue bacon, which is simple and delicious. Pour barbecue sauce on bacon as you fry it. The slimy, greasy awesomeness that results is most likely a one-way-ticket to heaven. So, win-win. Or, lose-win-win, the “lose” part being that I’m now really hungry thanks to you, and there’s no bacon within reach of my seat. 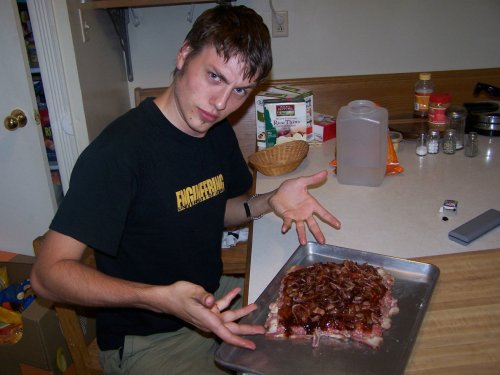 Shawn with a pan of barbecue bacon. If you wonder what the angry face is all about, remember, his HVAC training requires him to be highly volatile.

ES: What do you want written on your tombstone?

SBG: “There was an old geezer from Perth
Who was born on the day of his birth
He was married, they say
On his wife’s wedding day
And he died when he quitted this earth.”

ES: Describe the worst first date you can imagine.

SBG: Going into a diabetic coma during the date would be pretty horrible. The quickest way to revive someone that has collapsed into a diabetic coma is to administer a giant dose of glucagon by injection into the buttocks. Now, the needle is large enough it can be injected THROUGH clothing but I don’t wish to have a girl I hardly know inject glucagon into my rear.

ES: In closing, give a nice closing-worthy piece of advice.

SBG: There are some people that go through life asking “Why?” when various situations come up. If you look at situations and say “Why not!” instead, you’ll find yourself getting a lot more excitement and a lot more trouble in your life.

That concludes my interview with the famous Sir Shawn Barry Graber IV, Junior, Esquire. I have one more episode of The Famous Nobodies scheduled for publication, which will hopefully appear within a few days, and after that, we will see.