My School is my Castle

It is concrete and brick, with little dips in the tops of the walls. I think you could stick a gun through those dips, and shoot someone, without them being able to shoot you.

You know, like the little slit windows in old castles.

Also, there are round towers with stairways in them. That is where most of the stairways are. If you have a class in 209 South Santiam Hall, it would seem like you could just enter the building on the first floor, climb the stairs, and be on the second floor.

It is not that way.

You have to find a tower first. And climb the tower stairway. Then you can go down the outdoor hall and into your classroom.

There are a lot of outdoor halls.

Today my writing 121 teacher said, “We might be getting out of class early today, because a lady named Paulanne is coming to inspire us to write poetry. I’m going, and so I won’t get to eat my lunch. And I have a class after that so I won’t get to eat, like, ever. Oh dear, I’m really bummed out now.”

He is quite the character.

Later, he loaned us magazines to read. He picked one up, to demonstrate how to find the assigned articles. The pages were all crumpled and sticking together, like something had been spilled on them at one point.

“This is what happens when you loan out your magazines,” he said. “People read them in the bathtub.”

Oh Monday he was talking about something or other to do with writing, when he stopped and said, “there’s a dude walking by with a dog on his back!”

We looked. There was.

Others in the class declared him to be the nicest guy ever. My teacher said, “does he drive with a dog on his back?”

“No,” said the students who knew him. “He rides his bike though.”

Today the guy with the dog walked by the library. I want to talk to him sometime.

I wanted to be a princess today. You know, since I was in such a fortress. So I walked back behind the fortress to where the greenhouse was.

There’s a camellia bush back there. I picked one up off the ground, enormous and pink and covered in rain droplets. 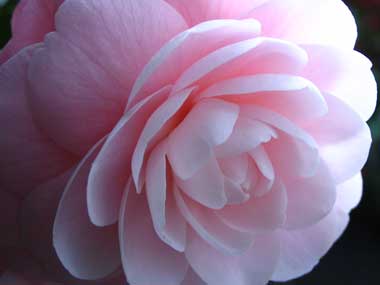 I carried it around for a while and then set it on top of a brown sidewalk lantern. It made the ugly thing prettier. I like to make ugly things prettier which is why I often carry a teapot around with me.

Anything is prettier with a teapot on it.

Anyway, I have been so busy. and loving it. I could eat busy for breakfast. Or I could forget to eat breakfast cause I’m so busy. That would be a bad idea.