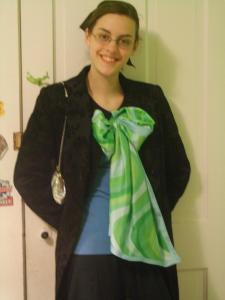 This is me wearing my beautiful black coat….

And this is me without the coat. However, in both pictures I am wearing a huge green bow.

Story: This evening Ben and I went to JD’s house to plan the entertainment for the upcoming youth fundraiser sweethearts banquet. During the meeting I admitted that I had a secret wish to play the kinect. So JD let me play his kinect.

So anyway, I was playing the kinect, and I began to get warm. I had on layered sweaters and a scarf. Finally I got so sick of that scarf around my neck that I tied it in a big bow right where my sweater fastens together.

(I could have just taken it off, but the blue shirt underneath was kind of tight and I liked to have the scarf on for extra coverage.)

Anyway, here is what it looked like for most of the day:

Blue sweater: This is sort of a vest-type thing with a low swooping neck but I turned it around so the neck would be high enough. Amy gave it to me once as a gift. As I was picking off the tag this morning so that I could wear it backwards I noticed that it was from forever21. Hmm. That makes me feel in the affordable fashion loop.

The black ribbon sweater was a Christmas present from Mom which she got for peanuts at a garage sale where you could fill a bag for, I think it was $1.50. I modified it to make it fit me since it was way too big.

Skirt–Amy gave it to me. She got it because it was a super-comfortable knit which looked like denim, but then it was too tight on her, so she gave it to me. Yay!

The long black coat from the first picture I have had for a long time. I don’t even remember when I got it but Mom told me today that it came from a thrift store, brand new with tags still on.

There is a hold in the pocket. And it’s missing a button. But no one notices and I get compliments on it all the time. So cool!

(Jenny took these pictures using Mom’s camera. She always wants me to do a “sniffing the armpit” pose, to look like Elane, the modest fashion blogger which Amy and I follow.)

The beautiful BEAUTIFUL green scarf is one of my favorite garments ever. It came from that land-across-the-sea called Yemen, where my uncle went once, and bought me this scarf.

Why? Because I told him how my sisters and I loved the movie “Confessions of a Shopaholic,” and how fascinating I thought it would be to be “The Girl in the Green Scarf.”

(Now that I think of it, I did become The Girl in the Red Rubber Boots. I hope that wasn’t plagiarism. I never even thought of the connection until now.)

(Funny that I do not own a pair of red rubber boots, but I DO have a green scarf.)

And then…oh yes, I am holding that glittery $18 splurge purse. That makes the total for my outfit come out to…$18. The purse is starting to redeem itself, though, because I take it everywhere, it is just the size of purse I have always wanted, and it makes me happy whenever I look at it.

New subject: I was blessed last night. Because there was SOMETHING (cue ominous music) that I could not deal with, and I knew that I had to give it up to God, but how the bunnyslipper do you just MAKE yourself give something to God?

Yeah…I do it with mental pictures. The first time, when I gave my sickness to God and completely quit worrying about it, I imagined that I was scraping gum off of the inside of my brain.

This time I was shoveling mud out of my brain.

Is that weird? I guess as I mentally shoveled all that mud out, and gave it to God, and scrubbed the walls, and re-painted them white (even in my spiritual mental pictures I like to re-decorate), as I was so concentrated on giving it, making myself give it up…

I fell asleep then. Contented. I had given it up.

It was a nice feeling. Like there is someone above making sure things turn out okay in your life, which I always know is true, but I don’t always feel.

It was nice to feel it.

7 responses to “Emily Gets Fashionable Again”