My Ideals for a Man 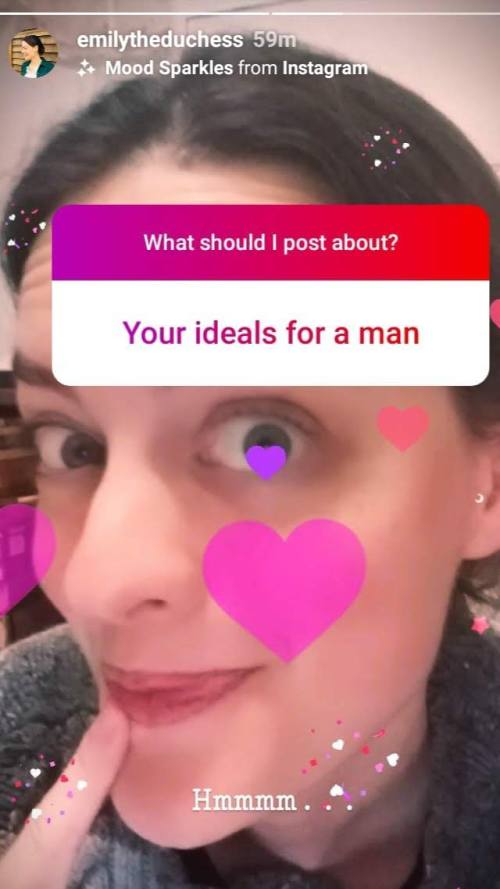 I asked Instagram for help with blog post ideas, and someone suggested that I write about my ideals for a man. Hmmmmmmm……

Here are my thoughts.

Thought #1: Isn’t it funny how your ideals change as you get older?

Like, in my teens and early 20s I was into the interesting guys. You know, the super-extroverted guys who’d wear unique clothes and coin their own catchphrases and stuff. A number of these guys darted in and out of my life, but one time, one of them stayed long enough for me to actually get to know him.

And it turned out he was really boring, on the inside.

After that I was into mysterious introverts. I thought there must be so many interesting thoughts boiling away inside their heads, and if only they would share them with me, how enchanting that would be!

But then I became friends with a mysterious introvert, and when I did hear his thoughts, some of them were pretty illogical.

Nowadays, I think my “type” is guys I can easily converse with on a number of topics. Guys who have thoughts to contribute, but also want to hear my thoughts.

(ETA: I hope this doesn’t come across like I’m mocking the guys I used to like. To be honest, there wasn’t anything really wrong with them, they just had the audacity to not be the person I imagined them to be, LOL.)

I read in a book once (I think it was Marry Him, by Lori Gottlieb) that people’s “ideals” totally shift around based on who they’re crushing on at the moment. Like, researchers would ask a group of women what their ideals were, and they’d list them out. Then these women would meet a bunch of guys. (I think this was a speed dating scenario.) Afterwords, they’d talk about their ideals again. Only if the guy they vibed with was, like, really ambitious, suddenly they’d go on about how much they liked ambitious guys, even if that was never on their original list.

This is totally true in my experience. If I’m crushing on a guy who’s a “thinker” on the Myers-Briggs, I’ll be convinced that it’s only thinkers for me. Who needs all that extra emotion in life?

And then if I get over him and fall for a “feeler,” I’ll start to think I do need a feeler in my life, to balance me out. How will we sort through conflict if no one in the relationship is truly in touch with their emotions?

If you think I’m gonna say “Mr Darcy,” you’re wrong. I’m not sure Mr Darcy and I would be compatible. He doesn’t have much of a sense of humor.

Instead, my ideal guy is Mr Knightly, from Emma. Here’s why:

Thought #4: If I can’t have Mr Knightly, I just want a guy who I’m compatible with

Thought #5: Actually, I do have a couple specific things I want

Unlike the “feeler” vs “thinker” thing, these two seem to remain constant no matter who I’m into at the moment.

Welp, there’s my list. What do you think? Am I too picky? Not picky enough? What are your ideals for a significant other?

8 responses to “My Ideals for a Man”