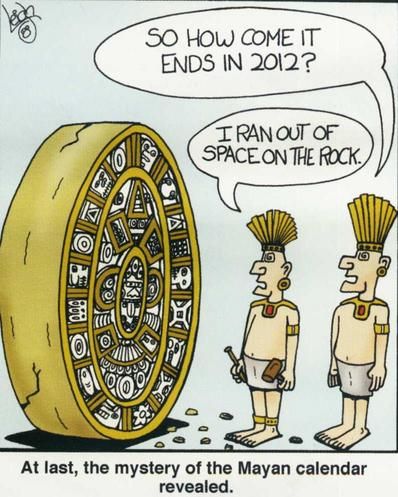 Do you remember how, seven years ago today, the world was supposed to end (according to some ancient Mayan calendar?) Personally, I had completely forgotten until I went digging into my old December blog posts, looking for Christmas memories. Then I saw this post, and the memories came rushing back. Man, we told some great end-of-the-world jokes in 2012.

But anyway, I was amused by this story, and decided to re-share.

Initially I dreaded December 21, 2012, because I knew how crazy facebook was going to be, with everyone saying “well I’m not dead yet!” and feeling clever.

Later I realized that I’ve only ever met one person who legitimately thought the world would end in 2012. Since no one is really scared, I concluded that “World Ending Day” would make a great holiday. What if, once a year, people actually lived like it was their last day on earth? What would you do differently?

In reality, I would probably spend time with my family, but half my family is on the east coast and the other half was at school today and my mom was terribly sick and could hardly talk.

In theory, I would do something beautiful like drive to the ocean by myself and leap through the frigid December waves. I didn’t do that either. I spent the morning watching “The Princess Bride” in my PJ’s.

I thought that at least I could cook a big feast for my family. I’m not much of a cook, but we had a big ham left over from “The Best Christmas Pageant Ever,” and I thought if I cooked it up tonight we could live on ham sandwiches for the rest of the week and Mom wouldn’t have to cook.

She is, as I mentioned before, quite sick.

Mom also gave me a list of errands that she would really appreciate if I did, and then she coughed and hacked and of course there was no way I could possibly refuse to do those errands for her. I probably would have done them even if it was legitimately the last day of earth’s existence and we would have no use for worcestershire sauce and ramen noodles ever again.

Now, maybe this whole Mayan thing fooled more people than I realized, because traffic in town was a nightmare. I missed turns and only had 25 cents for the parking meter and nearly hit a yellow car and started to go across an intersection even though there was a person crossing and in general had a very bad time of it.

I needed to get home and make supper. I had left for town later than I should have, due to general laziness and the charms of The Princess Bride, and traffic, as I said, was terrible. I was afraid I wouldn’t have time to cook.

After a few wrong turns, I found myself on some random road, and I wasn’t sure if I was going north or south or east or west. I was so tired and frustrated I burst into tears.

Tears are a bad idea while driving. They make it harder to see where you’re going. However, I eventually found my way to the interstate, and of course from there I knew I could find my way home.

As my tears dried, I had a sudden thought.

I laughed out loud.