Mom and I got to Minnesota on Sunday evening. We were picked up by my Uncle Rod and Aunt Rebecca, and taken to my Uncle Marcus and Aunt Anna’s house. Marcus is Mom’s brother, and Grandpa lives in his basement. Rebecca, Mom’s sister who lives in Chicago, is the next-closest, location wise, so she and Rod drove over on Friday as soon as they heard about Grandpa’s stroke.

That first day-and-a-half was extremely meaningful.

Grandpa was sleeping when we arrived, but he woke up, and seemed to recognize us. He could move the right half of his body somewhat, but not the left. Every once in a while he’d manage to say a word, but he couldn’t really talk.

When he saw me, he said “Jenny!” which I thought was kind of funny. “No, I’m Emily! Jenny’s sister!” I yelled into his good ear. But I think he actually knew it was me, just the wrong name had popped out. That happens to a lot of people.

He held my hand very tightly and cried and cried.

Grandpa wasn’t eating, but he could drink water from this nifty little sponge on the end of a stick. 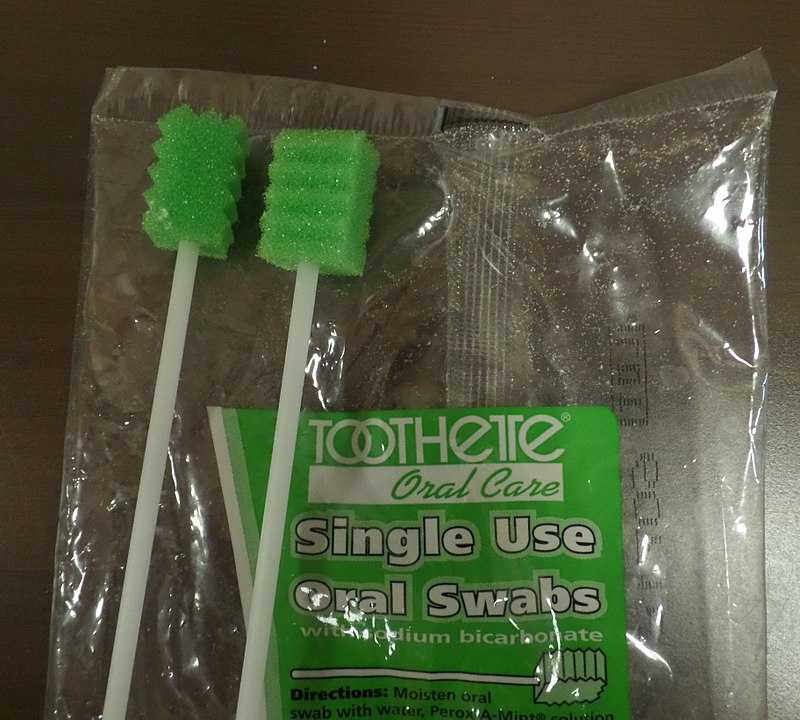 (I’m planning to buy some of these, when I get home, and use them to clean out window tracks.)

I gave Grandpa some water, on Monday, and he said, “Emily!” That was special.

He was still peeing, so his kidneys hadn’t shut down yet, but his pee was a bit more reddish, and Aunt Rebecca thought this meant he was nearing the end.

Fred arrived late Monday afternoon. He’d thought Grandpa was beyond the point of recognizing him, but when he learned that Grandpa could still recognize people, he got in his car and drove north. When he walked in, Grandpa said, “Fred!”

Mom, Aunt Rebecca, and I were taking a walk when Fred came. We could feel that the wind was shifting. A midwest thunderstorm was coming! That evening, I could hear low, soft rumblings of thunder.

I stepped outside and stared at the sky in awe. The whole thing, flickering on and off with such brilliance, like God was a small child playing with a light switch. I ran inside. “Mom! You have to come look at the sky!”

We ran out, together. “Don’t go out in the middle of the lawn!” said Mom. “If you go into an open area, you might get hit!”

“Can’t we go over by the barn and get a better view?”

So we dashed over to the barn, and watched the purple and flickering sky, and then the giant drops of rain started hitting us. I had a blanket over my head, so I didn’t feel the wetness, but they were so large I felt the impact as they hit me.

Giggling, we dashed back inside.

Still breathless and giggly, I walked into Grandpa’s room and saw everyone sitting soberly around his bedside. Aunt Rebecca, close to his ear. “It’s okay to go, Pop.”

Hail rattled against the windows. Grandpa seemed to be seeing something beyond this world. “My parents,” he said in Pennsylvania Dutch. “My sister!”

His breathing had changed. There was an odd sound when he drew in breath, like a distant gunshot. Then his breathing would pause for a bit before he’d breath again. Was it my imagination, or did the pauses get a bit longer each time?

So we sat there, in silence, as he raised his good hand and gestured at the air in front of him, at something we couldn’t see.

And we all thought, this is it. He could go any second now.

The moment was oddly suspenseful, like when you’re watching a movie, and someone is walking down some abandoned corridor, and you’re sure something will jump out at them.

And then, everything went black.

The electricity was out!

Uncle Rod and I went rummaging through the kitchen, looking for candles and matches. Meanwhile, in the darkness of Grandpa’s bedroom, Aunt Rebecca asked Mom to pray. So they bowed their heads, and just as Mom was praying, people’s phones began to blare. “Tornado warning!”

Well, we were already in the basement. What can you do?

Uncle Marcus looked out the window, and saw a funnel cloud come down from the clouds, but it didn’t touch the earth. The danger passed. But in the meantime we’d lit a lot of candles, and I couldn’t help but think, what if the house catches on fire and we have to drag poor dying Grandpa out of here in the middle of the night???

Thankfully that didn’t happen. Instead, we all calmly gathered around Grandpa again, and he continued to gesture at the sky. His breathing continued to pause.

This is it. He could go any second.

But then, it grew later and later, and Grandpa didn’t go. I was so tired. Can I go to bed? What if I missed Grandpa’s death?

This situation, I realized, had grown truly bizarre. Here we were, all sitting around waiting for Grandpa to die.

Earlier I’d felt this deep, transcendent thankfulness that I could be here for Grandpa’s final days. It seemed like the most special thing ever. And now, here I was, wondering when Grandpa would die so I could go to bed.

I mean, it sounds so bizarre to say I wanted Grandpa to just die. But he was bedridden, could barely communicate, and couldn’t move one half of his body. But his mind was still there…I mean…he knew that we were changing his diaper. How embarrassing must that be for him? If only he could just slip off peacefully to heaven, to be with Grandma and Lenny.

I finally dragged myself to bed. My alarm woke me at 3:30, and Mom and I got up and changed his diaper. I sat in the chair by his bed for the next two hours, awake enough to hear that he was still breathing.

And he was still breathing. In fact, the next morning the long pauses in his breath were gone. He was breathing normally again.

Wait wait wait. Is Grandpa dying or isn’t he?

And then, there was today. “Are you hungry?” Aunt Rebecca asked Grandpa.

“Do you want some oatmeal?”

So we fed him oatmeal, and he was able to eat it! The first thing he’s eaten since his stroke on Friday.

Suddenly, we’re all confused. Might he live for a while yet? What do we do?

Part of me feels like I should be thankful to have my grandpa around for longer. But it’s like I said before…he’s lived a good life for 102 years. It seems to be his time. And yet he could be with us for a while yet.

But death, as we know, does not run on anyone’s schedule.

This entry was posted in News, Stories, Thoughts About Life. Bookmark the permalink.