Elaine and Brandon’s wedding was to take place in a pavilion on top of a hill. But the reception was to be held in the somewhat-boring-looking church sanctuary, so we made it beautiful using all things twinkly (candles, string lights, twinkle lights, etc).

Most of the transforming was done on Thursday (you can read about that in part 1 of my Alaska adventure). But in order for the sanctuary to be properly twinkly we had to solve the problem of sunlight streaming in the large front doors.

Friday morning, Mimi, Elaine’s mom, attempted to solve the problem. “I went to Fred Meyer, but I couldn’t find black paper anywhere!” she said. “So I bought black bed sheets.”

Karli and I looked at them dubiously. But what do you know, folded in half they were the exact width of the door, and long enough to loop over the top. We secured them with bright blue painter’s tape, rolling pieces and tucking them under to hide the bright-blueness as much as possible.

The double layer was rather opaque. No more Halloween cobwebs. Karli and I gave each other a high-five.

Someone told me that Elaine wanted to talk to me about desserts, so I went over to where she was sitting. “Oh hey Emily,” she said. “So when you and Eileen are serving the desserts tomorrow…”

Friday was a lot more relaxed in general, since we’d gotten most of the work done on Thursday. Now that Kim was here with her rental car, we took full advantage of the freedom and went out to get coffee at the cute coffee stand where Elaine works when she’s not, you know, prepping for her wedding.

Only of course I got hot tea, and it came in the most adorable to-go cup I’ve ever seen. 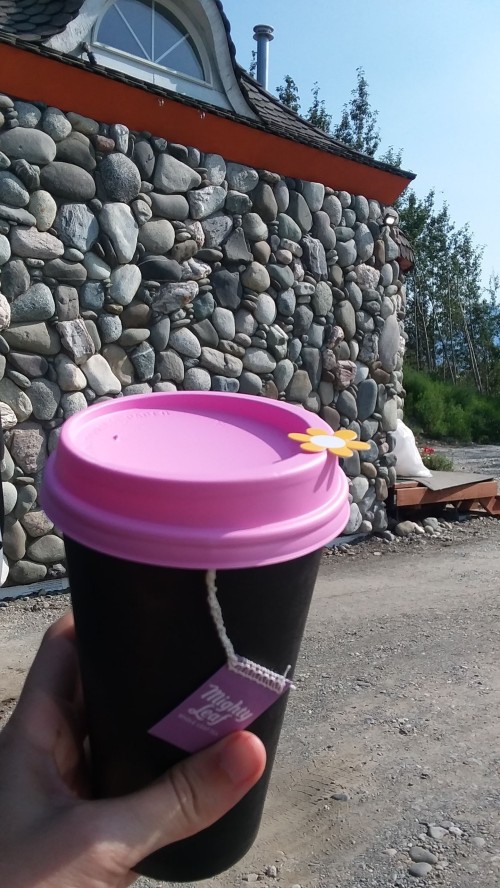 After that we had just a bit of time before the rehearsal dinner, so Kim and I went over to the apartment where Elaine and Brandon would live after they married. Kim had the address, but when we went inside we just saw office space, not apartments.

“I think the apartments are on the second floor,” said Kim.

“Where’s the staircase?” I asked.

We peeked around corners. No staircases were to be found. “Let’s just open some of these doors,” I said. Kim looked a bit dubious, but what do you know, the first door I tried had a staircase behind it.

We went up the stairs. “Which apartment is hers?” I asked.

“I don’t know…all she gave me was the address.”

Kim tried calling Elaine, but Elaine didn’t answer. So we walked along the hall, and I carefully listened at each door. Then, oh! That was definitely Elaine’s laugh.

I knocked. She opened.

It was a small studio apartment. Nothing fancy, and a bit old-fashioned, but quite charming. Virginia, one of the Kuhns siblings, and Daisy, who was married to a Kuhns sibling, were relaxing on the floor because there were no couches or chairs yet. Kim and I sat down too.

“This is so great!” said Elaine. “Finally, a chance to just chill with my friends for a bit!”

The “chilling” didn’t last long, however, because soon it was time for the rehearsal dinner.

The rehearsal dinner was held at Brandon’s parent’s house. The kitchen was brimming with food, so many dishes I knew I wouldn’t have a chance to even try them all. Victoria, Brandon’s mother, told me what each of them were. There was lots of salmon of course, as well as seal soup, whale meat (both cooked and uncooked), and herring eggs, which were on some sort of seaweed…kelp maybe? And something called “Eskimo ice cream,” which was sort-of like a fruit salad.

“I also made chicken for the English people,” said Victoria. I thought it was so funny that she used the word “English” to refer to non-Native people, because it’s the same word Amish people use to refer to non-Anabaptist people. 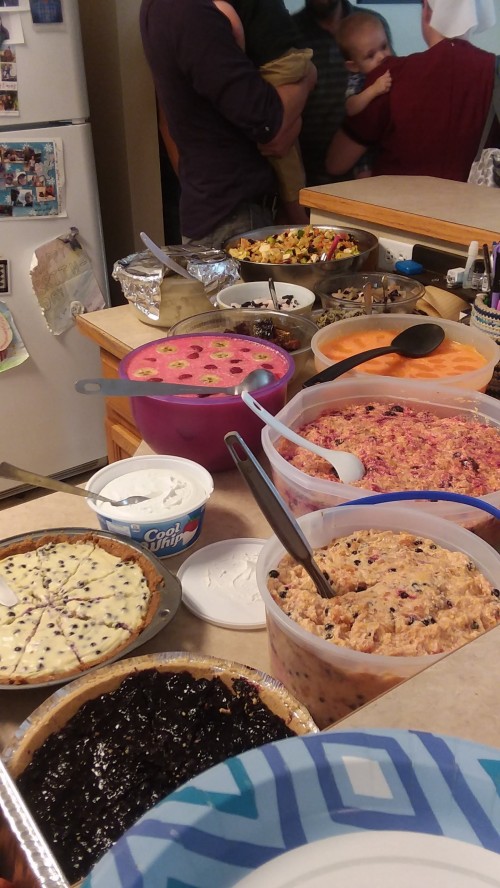 Elaine’s dad prayed in English, and Brandon’s grandpa prayed in Yupik, and then we got to eat. It was an amazing meal. I didn’t get to try nearly everything, but I ate all the most interesting-looking foods. Especially the seal and whale was a real treat, because in Alaska it’s illegal to hunt whale and seal unless you’re an Alaskan Native. It’s also illegal for an “English” person to buy whale and seal from an Alaskan Native, so our only hope of eating it is to have a Native friend.

However, if I’m gonna be honest, I couldn’t figure out how to eat the raw whale. I just couldn’t chew it. “You have to bite off the white part, and leave the gray part,” said Kim. But I could not for the life of me bite off the white part. Finally I realized that Kim had gotten cooked whale, which was much easier to chew. I’m still not sure how one eats the raw whale. Just stick it in your mouth and chew it like a piece of gum? Does it eventually break down?

The herring eggs on seaweed tasted exactly how the Newport Bayfront smells. I don’t know how else to describe it. 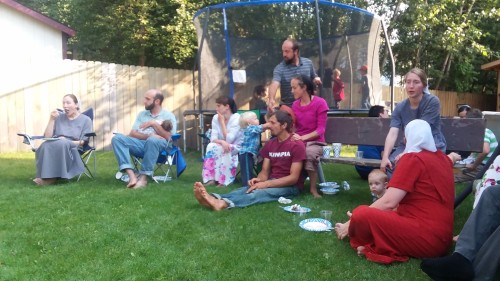 Relaxing in the back yard, eating delicious food. 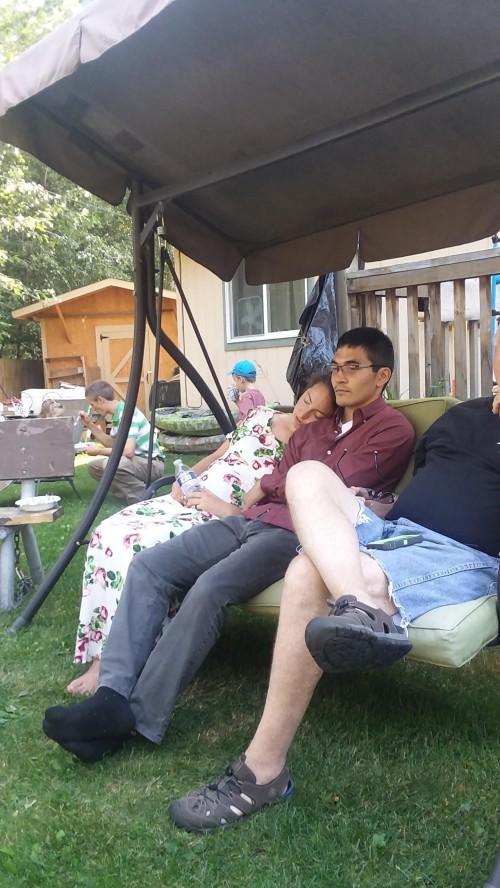 Elaine and Brandon at the rehearsal dinner. Poor Elaine was exhausted!

That evening it was mostly running errands. The next morning we didn’t do much, because everyone else was in and out of wedding photos, but then we went to the church early and did all the bippy things that still needed to be done.

Eileen and I, of course, were doing desserts. There were cheesecake cupcakes that needed to be served on these artsy birch slabs. But then, we heard that the guy in charge of the meal was short-handed. So, maybe we’d have time to help him with food if we got all the cheesecakes onto their slabs early.

This was like, forty-five before the ceremony was to begin. We started clearing off surfaces in a back classroom, and filling them with frozen cheesecake cupcakes atop birch slabs. And then…

Another chance to be innovative. Thankfully there were many more birch slabs than we needed. Eileen began checking and sorting them, while I double-checked the good ones to make sure they were decidedly bug-free, and continued arranging the mini cheesecakes.

“I’m sure this is enough,” I said finally. “We don’t want to arrive at the same time as the bridal party and have to try to dodge out of pictures.”

Of course in the end I did a couple more random tasks, and what do you know. I ended up arriving at the pavilion at the same time as the bridal party, and had to try to dodge out of pictures. Haha.

It was an absolutely beautiful ceremony, though. There was hardly a dry eye in the place as they read their hand-written wedding vows to each other. Next thing you know, everyone was laughing when they tried to do a unity ceremony with salt, and the salt stuck to its container and wouldn’t pour out.

Laughter and tears. The perfect wedding. 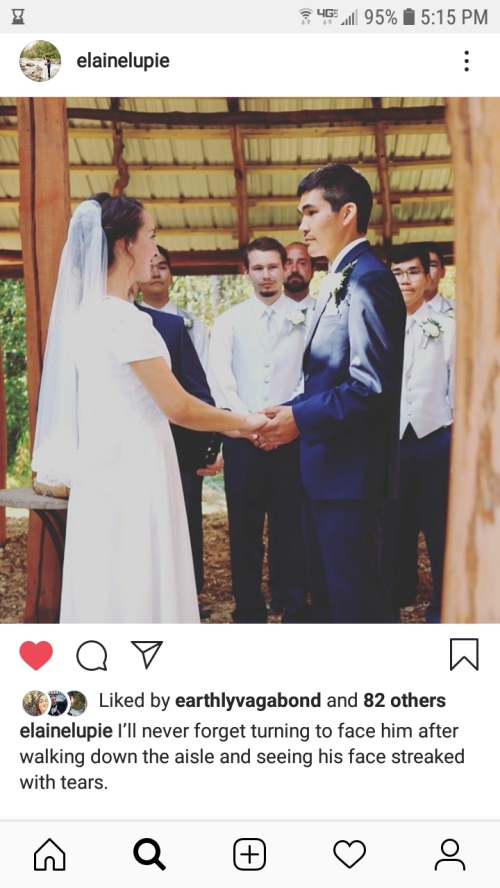 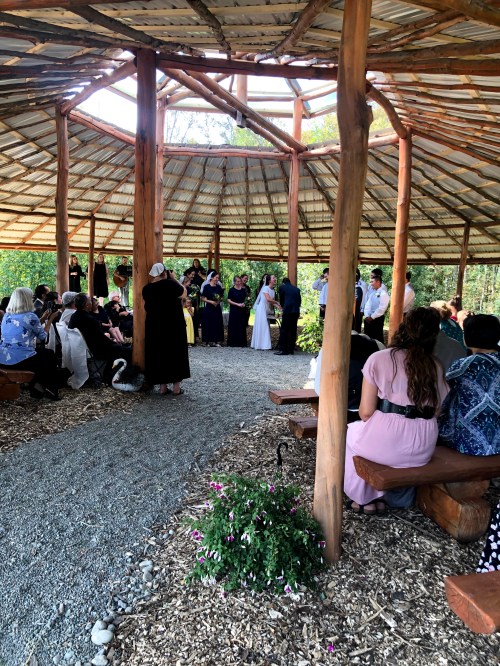 (I didn’t take photos during the ceremony, but I stole this one from Karli.)

Eileen and I skipped the receiving line because there were things to get done. Wesley and Karli had skipped ahead to light the candles and switch on the twinkle lights. “Hey Emily,” Elaine said as we zipped past the receiving line, “can you get drinks out?”

That’s how Eileen and I found ourselves in the kitchen, mixing up batches and batches of lemonade, and handing them over to whatever strong-looking person happened to be in the kitchen right then. “Can you put this on the drink table? Thanks!”

Okay, lemonade levels were stable. What about water levels? What about coffee levels?

Oh! No one put creamer on the coffee table.

Oh! What are we supposed to put the creamer in? Surely we have something nicer than just the jug it came in? A chance to be innovative! Soon we were washing up some sugar dispensers we found in a cupboard in the church kitchen, and labeling them using scraps of paper, scotch tape, and a green marker. “It’ll look fine. It’s pretty dark out there,” said Eileen.

Then we set up the dessert table (using only bug-free birch slabs, of course), and then Virginia was like, “you do realize there’s another grocery bag full of lemonade concentrate, don’t you?” We hadn’t realized, but now we did, so we mixed up even more lemonade. And then finally, we had a chance to take a breather.

Karli came by. “You can sit at that table up there, with the assorted bridesmaids and Wesley.”

We kept the dessert table filled. We ate our food. We admired the couple. 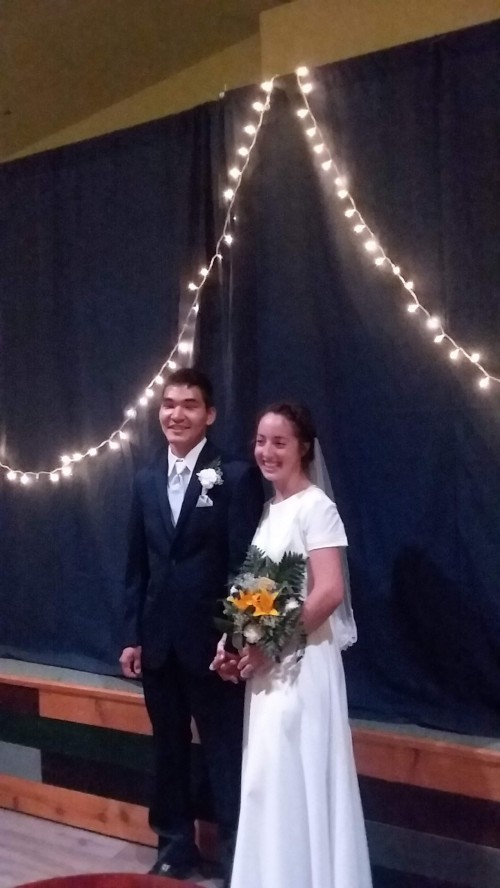 We signed at the romantic-ness of their first dance.

And then we looked around and realized that people were leaving, and the whole thing was almost over. We took out our tiny bubble wands and blew a cloud of bubbles over Elaine and Brandon as they dashed away, into their new married life.

From Friday morning until Saturday evening, I was so focused on the wedding that I didn’t have much time to stop and appreciate Alaska. But then, once we’d gotten Elaine and Brandon married, restored the twinkly reception hall back into a run-of-the-mill church sanctuary, and eaten a supper of wedding-food leftovers, things changed.

We had time for the wilderness.

However, I’ll talk about all that in my next post, which will be the final post in my Alaska series.

One response to “Alaska Part 2: The Wedding”