My first introduction to Alaska came 45 minutes before my flight was supposed to land, when I finished my movie and lifted the window shade. As I peeked out upon the Alaskan landscape, still brightly lit at 9 pm, my jaw hit the floor.

Look. I thought Oregon had “real” mountains, and I’d snicker at what passed as a “mountain” on the east coast. But let me tell you. Oregon mountains are nothing, NOTHING compared to Alaska mountains.

A quick Google search would have told me this. The top 10 highest mountains in the USA are all in Alaska, while Mt. Hood doesn’t even make the top 200. And while I knew Alaska mountains are taller than Oregon mountains, I had NO IDEA the disparity would be this drastic.

Here’s where I ought to post a photo. And let me tell you, that was my first reaction when I saw the splendor of peaks and glaciers spread out before me. But the blurry through-the-window phone photo was completely inadequate to represent that sort of glory, and I quickly scrapped that idea and just stared.

So mesmerized that I thought crashing into one wouldn’t be such a bad way to die, as modes of death go.

I was in Alaska because my friend Elaine was getting married. I’ve known Elaine since 2016, when she first messaged me on Facebook and we got into a long conversation about living in vans and then we decided to go camping together in the Redwoods.

For Elaine, the adventure never stops. She ended up moving to Alaska, where she met a swell guy named Brandon, and then the two of them decided to tie the knot and invite all their friends to come watch.

Thanks, Elaine and Brandon!

I was picked up at the airport by Elaine’s parents, as well as what I call “The Kuhns Clan…” three Kuhns siblings, one spouse, and three of their children. Also Wesley, who wasn’t related to but often hung out with the Kuhns siblings. They were all friends of Elaine, and they’d arrived an hour before me. We all were in a large white van. Elaine told me that I didn’t need to worry about renting a car. Apparently rentals are really expensive in Alaska. 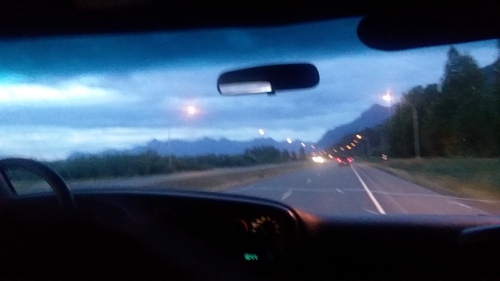 I snapped this blurry photo out the car window, trying to capture the looming mountains as well as the endless twilight. It was too far south, and too late in the year, to see the midnight sun. But the golden hour stretched on and on, and when the sun finally set at 10 pm, the twilight seemed never-ending.

Pete, Elaine’s dad, had the sharpest eye for wild animals. “Moose!” He’d call out, and sure enough, there was a moose. “Fox!” He called. And there it was, bushy tail and everything.

After an hour of driving we reached Palmer, Alaska, and Pete dropped me off at Bob and Dianne’s house. Bob and Dianne were friends of Elaine who had some extra room. Several other people were planning to room there over the wedding, but since I’d come early, for now it was just me. Everyone else in the van was staying at this place called InterAct Ministries, which had a large guest house.

You’d think it would give me FOMO, but the introvert and needs-her-sleep in me was rather delighted.

The next morning I was picked up in a stretch Hummer limo. 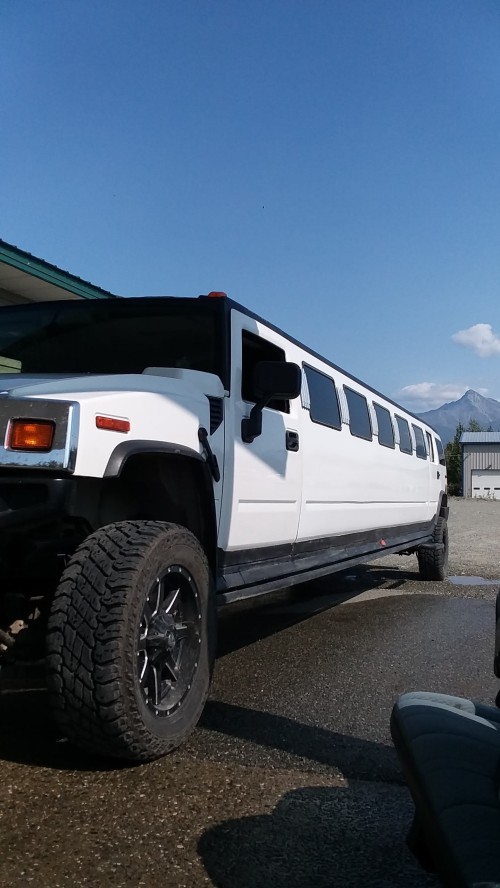 I opened the door to this thing and it was a PARTY CAR. Mirrors, neon lights, lava lamps, clear-plastic cup holders, glass bottles for booze. Only of course there was no booze.

There were, however, lots of car seats. 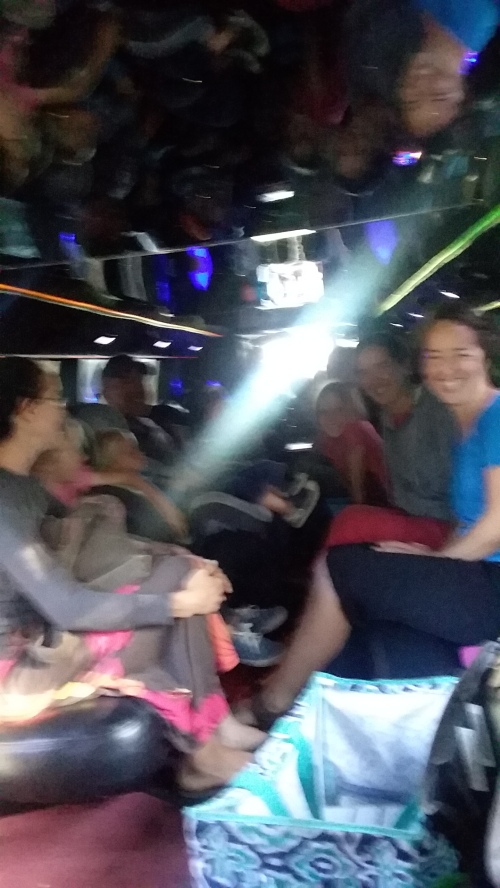 (Sorry for the terrible photo. My phone camera is iffy at the best of times, and downright terrible in low light. Also sometimes I just push the button and then forget to look at the picture and make sure it’s not blurry, LOL)

For some reason Elaine’s brother, who also lives in Alaska, has a friend who owns a stretch Hummer. “Oh, that can haul a lot of people,” Elaine’s brother thought. So he borrowed it for the wedding.

The Hummer was filled with Elaine’s parents, siblings, siblings-in-law, nieces, and nephews. Also her cousin Rose and her cousin Eileen. And Sherri, her friend/bridesmaid. We all went to the church where Elaine was going to get married, and we weeded, spread pea gravel, strung up lights, set tables, etc. The Kuhns clan arrived and also helped out. I’m not sure how they got there, because I overheard someone saying that the van we’d taken from the airport had broken down, and I never saw it again for the rest of the weekend. 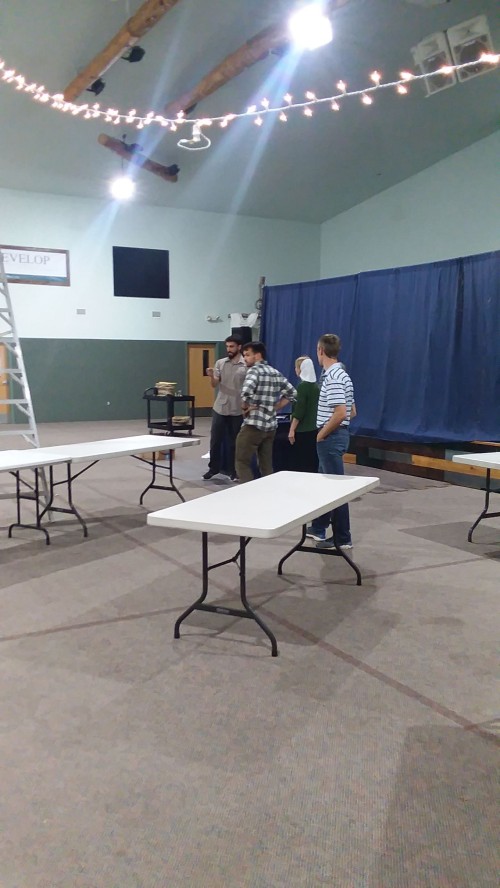 Trying to figure out table placement.

Elaine wanted the reception to be lit only by candles and string lights, so Karli and I took on the task of covering all the windows.

“I feel like at home we’d just run to Walmart and get what we needed,” said Karli, looking at the collection of tape, scissors, and Fred Meyer paper grocery bags she’d collected from the church kitchen. “But that’s not Elaine’s way.”

“Oh well, it’s a chance to be innovative,” I said.

The sanctuary, where we set up the tables, was surrounded by classroom doors that had little rectangular windows. We taped brown paper bags over them, from the inside of the classrooms, so that from the main room it looked rather nice. We were stumped by the big nursery window for a while, but I found a huge roll of paper in a back storage room of the church. I had to lie on my stomach atop some broken-down chairs to retrieve it, but we managed.

The big glass doors leading into the sanctuary were the last hurdle. The white paper had worked on the nursery window, because it was tinted so you couldn’t tell that the paper was white. But for the big main doors, we wanted black.

Garbage bags? No, too tacky. Table cloths? The only ones available were spandex. We stretched them over the doors. Hey, that kinda works!

But when we shut the doors, and the sun shone through, they looked strange and creepy. “Do they look like eyes, to you?” I asked. Because something about their placement rounded the edges of the doors, and the two posters already taped to the doors looked like pupils of two giant eyes.

Rose chimed in to say that to her, the stretched-out spandex with the sun shining through looked like black Halloween cobwebs.

She was right. It did.

Giant eyes? Halloween cobwebs? The spandex tablecloths had to go.

Karli and I made up our minds to just drive to Fred Meyer and buy black poster board. But what were we supposed to drive? The Hummer? In the end, we didn’t go after all, due to vehicle shortage. “I guess we’ll just get it tomorrow,” we decided.

After all, it was only Thursday. The wedding wasn’t until Saturday.

We all went over to the InterAct guesthouse for supper. Elaine and her immediate family, their spouses and children, her two cousins, and Sherri were all in the vast upstairs space. The Kuhns clan and Wesley were downstairs, in a smaller apartment. It began to feel like everyone was part of a clan, either the Stoltzfus Clan or the smaller Kuhns Clan. Sherri, Wesley, and I were the random wild cards who weren’t related to anybody.

The cool thing about Alaska is that you can just go on a hike after supper without having to worry that it will get dark. 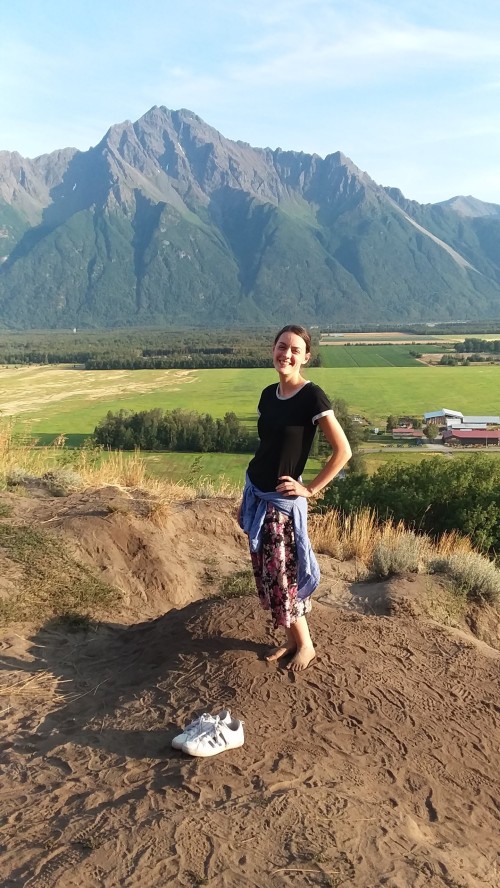 The dirt was soft, like powdered sugar, and many of us went barefoot. 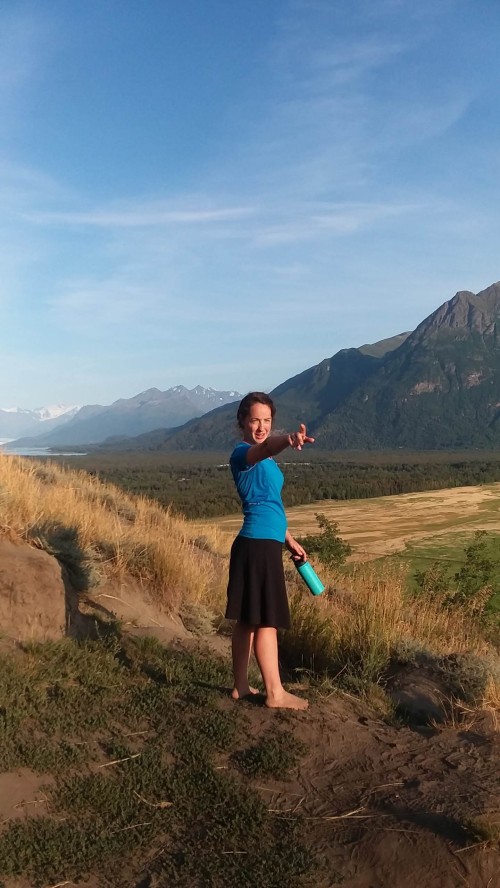 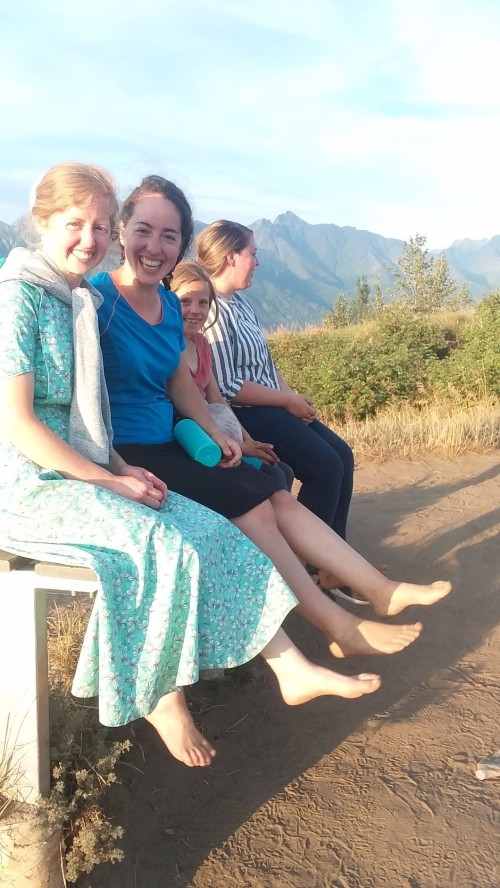 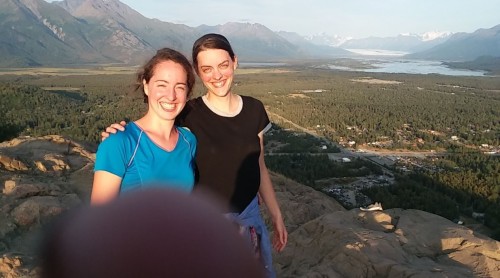 Elaine and I. And Elaine’s brother Mel’s thumb.

Kim, my roommate from Kansas, called me while I was on the trail. She was the wedding photographer, and she was going to stay at Bob and Dianne’s with me. “I’m coming in about 3 am,” she said.

“Okay, do you have an address for your GPS?”

“Well, when you go in the driveway there will be a log cabin on your left, and then a new house on your right. I’m in the new house. You can go around back to the basement door. I’m the only one in the basement. Just open doors and poke your head in until you find our room. If you have any trouble, call me.”

We all piled back in the Hummer, and they dropped me off on their way back. Hard to believe it was nighttime already, with the sky in its endless twilight, but it was. I went to bed.

“Hi, I don’t know what to do. All the doors of the house are locked.”

“Okay, I’ll let you in.” I stumbled out of bed and opened the basement door. No one was out there. “Are you sure you’re at the right house?”

“What? But I went in the driveway, and there was a log cabin, and a newer house…a blue house…”

“Oh yeah, sorry. You have to keep going down the driveway a bit. Sorry I forgot to tell you about the blue house.”

Soon I heard a soft rumble, and Kim’s car came purring up. She’d opted for a rental, despite the expense. She was mortified. “I can’t believe I went to the wrong house!”

“I can’t believe I wasn’t clearer in my instructions! And I told you to peek into all the rooms! What if you’d actually gotten inside and went peeking into stranger’s rooms!”

We heard footsteps on the stairs. Bob came down, in his bathrobe. “Is everything all right?”

“I accidentally went to the blue house instead of this house!” said Kim.

He trotted back upstairs, and we all went to bed.

This has been part 1 of my Alaska adventure. Part 2 is coming…soon. In the next day or two hopefully. I have many projects to work on this week, including a play that I need to have done for VBS next week, so we’ll see.