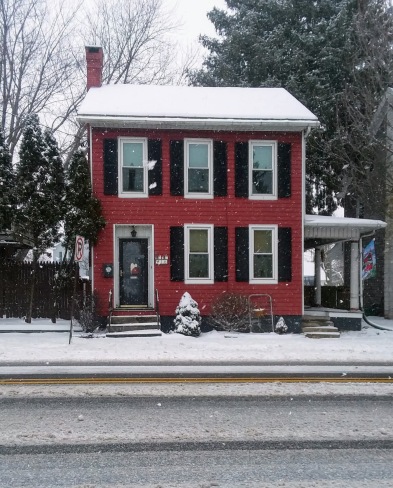 There were flurries of snow in Ohio in November.

And there was absolutely no snow during my three weeks in Florida.

So when I came to Myerstown Pennsylvania this February, and it snowed, I was enchanted.

Enchanted, but terrified to drive in it. So I walked. I walked to McDonald’s and bought some terrible tea. I walked to the library, but it was closed.

I took pictures of cute houses.

I soon learned that my entire winter wardrobe was actually a fall/spring wardrobe in Pennsylvania. A light sweater isn’t enough. Bare legs are never, ever warm enough, even if you have above-the-knee leggings on under your skirt. So I went shopping, for boots and fleece-lined leggings and warm sweaters and skirts that aren’t too bulky over leggings.

I still pretty much wear the same giant wool sweater every day, though.

Yes, I was enchanted when the snows first came. When the fear of driving in it kept me home, and the sky stayed a stubborn gray, I grew a bit melancholy, in an unpleasant way.

It snowed the morning of Ian’s funeral, and Ian’s cousin Daniel called it “frozen tears.” Fitting. And since that day, one week ago, the snow has stayed. The world is covered in a blanket of white.

In Oregon, my family and friends experienced a giant snowstorm. My Facebook and Instagram feeds were full of relatives, church friends, and college friends, endlessly sharing pictures. What beauty! They made snowmen and snow forts. The kids, but the adults too. School was canceled for days.

Pennsylvanians don’t seem to do this.

By March, Pennsylvanians seem about as excited by snow as Oregonians are by rain.

When I was a child, I didn’t understand why adults talked so much about the weather. Who cares?

But when I became an adult, I noticed the way the weather affected me. How the endless rain of March made me ache for spring, and for everything to change. How a cool breeze on a hot day made me feel like extraordinary things were possible.

And when snow fell all night, and the cold sun glistened upon it all day, I felt like there was a blanket of grace over this ugly, muddy, dead brown world.