I flew through the night, thinking I would like the red eye flight because I could sleep and miss out on the generally terrible experience of flying.

Which would be a good idea, were it possible to sleep while crammed between two strangers.

It isn’t. In case you wondered.

I spent Friday chilling with the Barbo boys. 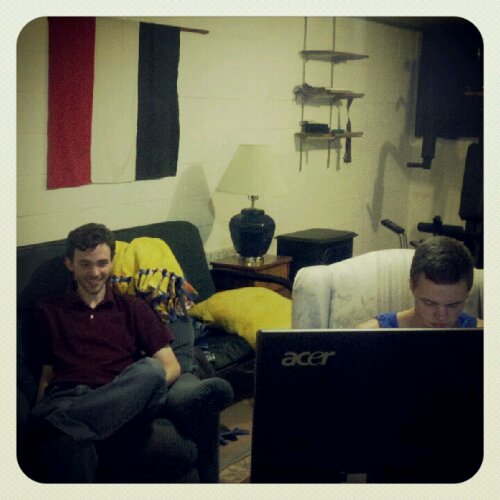 I then took a shower…and found something of mine which has apparently sat there for TWO YEARS. Because, you know, that’s how long its been since I’ve lived here. 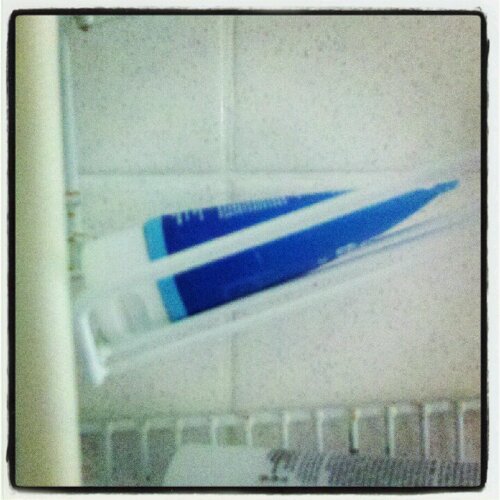 See how both those pictures are well-lit, indicating that there was a functioning lightbulb somewhere in the room?

Yeah. It didn’t last. That evening the biggest most bizarre storm hit. Me, Keith, and Jason stood on the front stoop and watched it–lightning splitting the sky, branches whipping around, hitting the power lines and causing sparks, leaves filling the air like overgrown snow.

Then, of course, the power went out. We played rummicube, and waited for Derek and Rebecca, who were both driving home.

Rebecca got home first, completely shaken up. She had just spent a week in Yemen without electricity. She flew back by herself, tired and sick, and missed her connecting flight while on a layover in Germany. After being stranded in Germany for a day she made it home, only to have to drive home in the storm.

“I had to grip the stearing wheel with all my might, because the wind wanted to blow me all over,” she said. “everyone was crawling around at 30mph, with their turn signals on, dodging the fallen branches littering the road.”

Derek arrived home from his West Virginia day trip about a half hour later.

“Are you okay?” Aunt Rebecca asked him.

“I almost died eighteen times,” he said. “But I can’t talk about it because I really really have to use the bathroom.”

“That was the eighteenth way he almost died,” said Jason, as Derek disappeared into the bathroom. “His bladder almost burst.”

When Derek resurfaced, Rebecca said, “so tell us how you almost died eighteen times.”

“Don’t tell us about the eighteenth time,” said Keith.

Derek and his friends had faced multiple trees across the road. The redneck guy who stopped to help them told them of a different route they could take…if they wanted to go to a good strip club.

Eventually they found their way home, obviously, but going through town was crazy because the stop lights didn’t work, as the entire town was out of power.

Today we are still out of power and making milkshakes to salvage the ice cream. I’m using a friend’s internet. Not exactly how I planned on spending the first days of my trip, but exciting in its own candle-lit way.

This entry was posted in Uncategorized and tagged electricity, storm, travel, Virginia. Bookmark the permalink.