Before I talk about my two days at REACH, I should mention that there was even more drama regarding my family’s travel plans. Originally we all had an Airbnb until Friday. Friday evening I’d go to Philadelphia and Ben would go to his friend Daniel’s house, and Mom and Dad would drive to Baltimore for their early flight home.

Then Mom and Dad’s flight was mysteriously canceled, and they were re-booked for a Sunday flight. In some ways this was a good thing. It meant Matt and Phoebe could come spend Saturday with us, and I could delay my Philly trip and take Ben to the Philly airport on Sunday.

But the unfortunate thing was that our cute Airbnb in the old stone house ten minutes from the REACH conference was booked over the weekend, and we had to find someplace else to go.

Actually this information won’t be important until the next blog post. But keep that in your head.

So, REACH. We went over on Thursday morning for the opening session, and I have never seen a larger or more overwhelming group of Mennonites in my life.

Like, over there was a girl I knew in Virginia who ended up marrying my brother’s best friend’s ex-girlfriend’s husband’s brother.

And there’s the guy who, 9.5 years ago at SMBI, told a gross joke about diarrhea.

Oh! It’s the lady we knew in Kenya! I stayed with her parents in Florida! I’d love to talk to her, but she’s going this way and I’m going that way!

People I met last fall, and people I knew years and years ago! People I’ve interviewed over the phone but never met! Second cousins I’m friends with, and second cousins I don’t know if I’ve ever talked to! So many people from so many corners of my life, it’s like a bad dream! 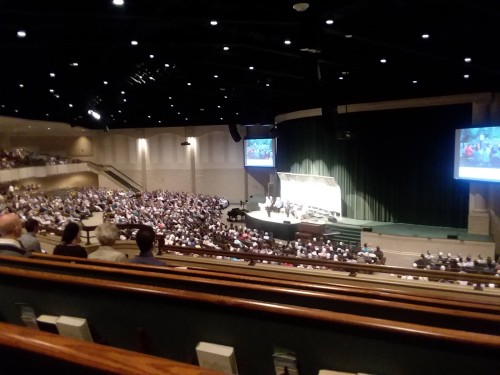 During the opening talk I thumbed through my booklet and tried to decide which breakout sessions looked most interesting.

Some, like “How the Heavenly Father Can Meet Your Deepest Longings,” or “Finding Identity and Security in Christ,” or “Emotional Phases of a Women’s Life,” I had absolutely zero interest in. I’ve been in enough women’s Sunday school classes to know that I won’t relate to most of it, but the assumption will be that everyone must relate to these things, or else they are barely human. And then I’ll feel annoyed and bitter and maybe even a little superior, which is never healthy.

Instead, as I mentioned earlier, my greatest interest lies in cross cultural communication. So after the opening session I went to a breakout session titled “Maintaining the Dignity of the Poor.” And it was so good. The speaker did PR work for CAM, a major Mennonite relief organization.

He talked about the importance of getting to know people before snapping pictures of them, and rigorously fact-checking heartwarming stories before repeating them. About not doing things for people that they could do for themselves. About not assuming that you know what people need…about assuming, rather, that you don’t know, and humbly asking. About avoiding sensationalism when speaking about the poor.

I found it especially interesting that this came from a PR person. I feel like mission PR people have done a poor job, in general, of maintaining the dignity of the poor. If you’re trying to raise money in the US, undignified pictures and sensational stories about poor people are going to earn you more money. So having him humbly talk about his own mistakes and what he’s learned was fascinating.

When the breakout session was over I met up with my parents and we went to lunch. Ben was actually back at our Airbnb. He’d borrowed my car after the opening session because he wanted to get a little work done. Mom, Dad, and I all wanted to go back to the Airbnb for various reasons, and since lunch was cold and served in boxes, we just took them and left in my parent’s rental car.

I was very tired. I crawled into bed. “Can you three just take the rental car back, and leave my car here for me?” I said. “I’m not sure how long I want to stay.”

Then I fell asleep and slept until 4 pm. Should I go back for the final breakout session and the closing session? But all those people. All those masses of Mennonites. And I was still so tired.

Yes, wasted money and such. But sometimes rest and aloneness is so nice.

Friday, I slipped in just as the opening session was starting and slipped out before it ended, so there were no obligations to stop and politely chat with that guy I hung out with at the Faith Builders College Student Retreat in 2012. From there, I headed to the book signing mom and I were having at a nearby coffee shop.

Mom had strategically planned it so that our signing would draw people who were attending REACH. It was a much less overwhelming environment in which to chat with people. I had a good conversation with Katrina Hoover Lee, who is also a writer.

Slight tangent. Do you have those emails that sit in your inbox, and you’ve marked them as unread because you know you need to reply to them, but you don’t reply to them and then you feel guilty whenever you open your email?

As I was talking to Katrina, I realized with horror that she had written me one of those emails I never replied to. I tried to explain myself. “You asked me how I was making it as a freelancer, but at the time, I had no clue what I was doing,” I said.

Now my inbox is a little less guilt-inducing.

The most dramatic moment of the book signing was when a small child puked up a belly full of magenta tapioca, right inside the front door. I alerted the employees, who poked around not doing anything for a good while, while dubious customers entered the shop and gingerly stepped around the mess.

Finally a young employee came along with a substance that looked like brown-ish kitty litter and smelled like juicy fruit gum. He slowly sprinkled it over the pile of puke.

“Take a picture,” whispered Dorcas Stutzman, who was hanging out with us. 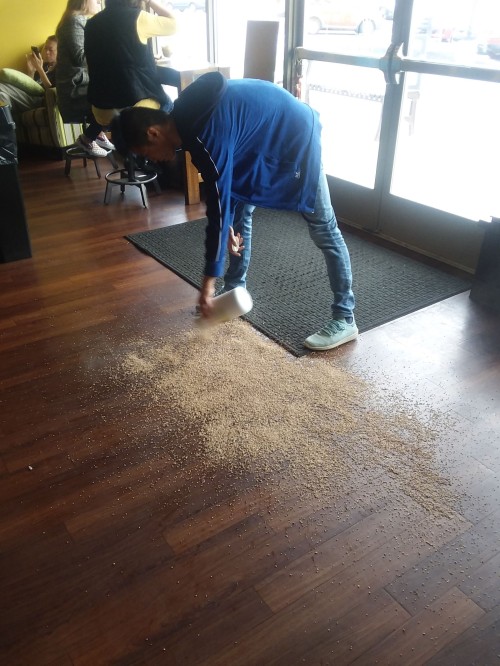 It was hard to watch. You just wanted to grasp that broom firmly in two hands and make short work of things. I saw Mom grow more and more agitated until finally she stood up.

“Why don’t you hold the dustpan there, and I’ll sweep it up for you?” she said.

Whisk, whisk! The job was done. Now the young man set to work wiping the floor with Lysol wipes.

I went back to REACH in time to eat lunch and attend another breakout session. This one was a panel discussion called “Anabaptists Respond to the Refugee Crisis.” I walked into the main auditorium and sat near the front and center.

But then, what was happening? No panel was getting on the stage. Instead, a well-known counselor was climbing up the steps. The screen above him showed the title of his talk.

Finding Identity and Security in Christ

Oh great. Really?!? My first instinct was to bolt. But how rude would that be, marching away, in my lightbulb-yellow coat, just as he’d begun to speak?

“Identity in Christ” is a phrase that gets thrown around a lot, and it’s never made a lick of sense to me. But it’s always said with this assurance that everyone will understand the meaning, and it will resonate with them.

But if you don’t understand the phrase, maybe you can learn something from this session, my practical side reminded me.

Besides, I am planning to at some point (April maybe?) write a blog series on identity. A reader requested this topic maybe six months ago. So maybe this session would be helpful?

And it was helpful, in some ways. I did feel uncomfortable and like my own experiences weren’t valid, because I don’t respond emotionally in the same way that “normal” people apparently do. Which is a feeling that I hope to explore more when I eventually do my identity series.

On the other hand, I think I understand the phrase “identity in Christ” somewhat now. While the phrase doesn’t appear in Scripture, the phrase “in Christ” actually appears many times. We’re made alive in Christ, there is no condemnation for those that are in Christ, etc. From what the speaker said, it seems like many people, if they can believe these statements about who they are in Christ, can then (somehow?) keep from placing their identity in other things, such as their job or their ministry.

When it was over, I went sleuthing to figure out what happened to the refugee panel. Turns out it was in the “chapel,” and I was in the “sanctuary.” Oops. This was a HUGE CHURCH, the likes of which I’ve never seen, okay?

Anyway. The last breakout session I went to was called “Essential Character Qualities for Communicating Cross-Culturally,” which was more up my alley. Although, maybe I didn’t learn as much as I did from the identity in Christ one, if I’m going to be honest.

I skipped the last general session and instead had a good conversation with an old friend from Mission Training Center days.

Overall, despite the overwhelming nature of REACH, and despite the fact that I missed probably half of it, I had a really good time. I miss school, and it’s so great to be able learn again. And it did give me a chance to have a few good, deep conversations with people I wouldn’t normally run into.

And so, feeling full, I got into my car and drove to our new Airbnb.

“Hmm,” I thought as I drove my car. “Something is very wrong here. Hope it lasts all the way to the Airbnb, at least.”

And then, after 45 minutes of driving struggle, I arrived.

But am I going to tell that story now? Oh no. This blog post is already way too long. You’ll have to come back for it tomorrow. 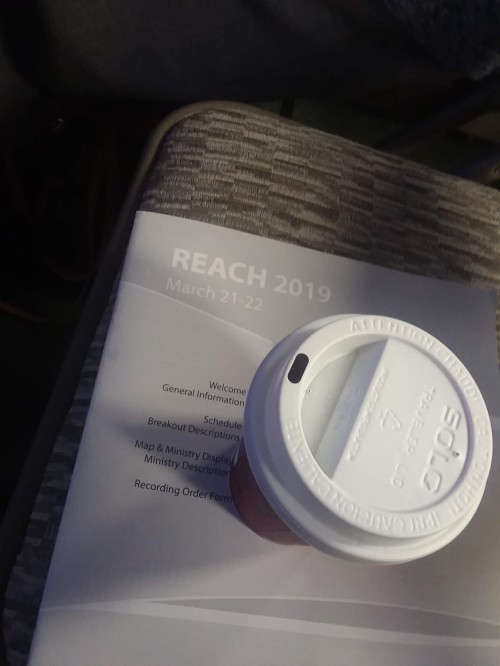