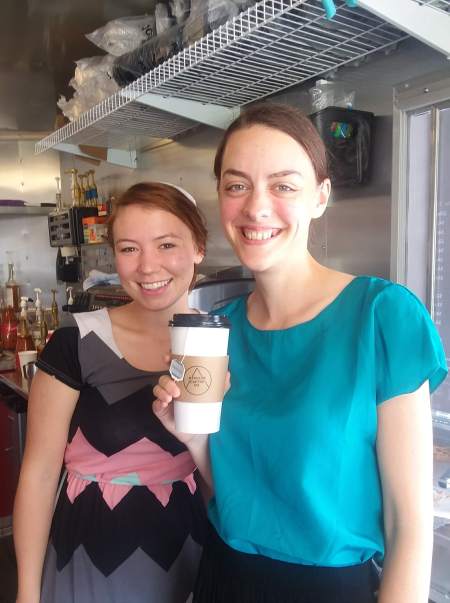 Sarah Beth and I in the coffee cart

It was late when we got to Texas. Somewhere between 11 pm and midnight. Sarah Beth met us at the door, wearing PJ’s and a smile.

“I just moved in today, so things might be a bit chaotic,” she said.

Amy and I laughed. I guess it’s our lot in life to pop in on friends when they’re in the middle of moving.

The last time we’d seen Sarah Beth was at her wedding this summer, but that being, you know, her wedding, we didn’t have a whole lot of time to hang out with her. We made up for it now. Who cares if it was the middle of the night? We sat on the couches and started gabbing.

Eventually we made our way to bed. By the time I got up in the morning, Sarah Beth was already gone. She had an early morning babysitting job. Andy, her husband, had also gone to work. I rustled around in the cupboards looking for tea, and then sat on her couch and sipped it in the quiet morning. It felt just like old times.

That’s how we used to hang out. I’d go over to her apartment and we’d stay up late, figuring out the personality types of all our acquaintances or whatever. Then when I’d get up in the morning they’d all be gone to work. She and her roommates. And I’d find myself some breakfast and tea, and just chill alone at their place as thought it were my place, before finally driving off to my 11 am class.

In case you haven’t figured it out by now, Sarah Beth has about 10X the energy I do.

Eventually she returned, and the three of us got ready to go to her main job at Atrium Coffee Co.

She felt a bit bad that she had to work the afternoon shift both days that we were in town. Beyond a few jaunts to thrift stores and the local Mexican restaurant, most of our time in Texas was spent sitting in a coffee cart.

But, see, it was great. Business was slow, so we could sip our coffees and Texas Fogs (Like London fogs, only re-branded to appeal to proud Texans) and chat and catch up and try to figure out why people do the things they do.

And then in the evenings we got to know her husband Andy better. It’s kinda scary, when your friends get married to people you’ve never really gotten to know. But it turns out that I can trust Sarah Beth’s taste. He’s a cool guy.

Saturday morning it was time to leave. Amy and I left Rosebud and drove north and west. When we got to Little Rock, Arkansas, we took a tiny detour from the highway and stopped at the airport.

“Goodbye, Amy! Thanks so much for driving with me!” We hugged and she disappeared into the airport to fly home. It was just me, now.

I crossed the sprawling Mississippi River, zooming into Memphis, trying to stay on I-40 as it merged and un-merged with other highways. There were too many lanes for me to count without losing concentration and swerving out of my own lane. But it was great. There wasn’t a single traffic jam.

Through Memphis, into the wilderness again, I stopped at a little rural gas station. Where the inevitable happened: I couldn’t figure out the gas pump.

I went inside. “Excuse me,” I said. “I’m at pump 4, and I put my credit card into the machine but nothing happened.”

“Oh, it asked for a PIN? Yeah, that sometimes happens. Just pump your gas and come in here to pay.”

Well, my issue had nothing to do with a PIN. But whatever. I pumped my gas and then went inside to pay. In the polite chit-chat with the cashier, I wanted to explain why a grown woman like me would have trouble with a simple task like pumping gas. “See, I’m from Oregon,” I said. “We don’t pump our own gas there, so I’m not used to doing it.”

“Oregon!” he said in his thick southern accent. “What are you doing way out here?”

He looked at me like I was an idiot. “Well why did you choose Tennessee? Go to Florida or something!”

Ha. Well maybe I’ll take his advice once winter rolls around, but so far I’ve found Tennessee beautiful. Lush and green, with rolling hills and forests and bizarre blankets of kudzu.

That night I pulled up to the little brick house that was to be my home. It was the end of my trek across the country. Now, it was time to live for a month in Paris, Tennessee.

More about that in my next blog post, coming sometime this week.

One response to “Fun Times in Texas”