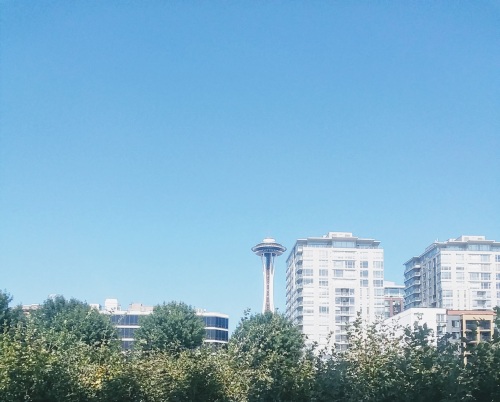 After exploring the city of Seattle alone for a while (read about that here), it was time to head to my friend Micaela’s house for dinner. Which meant taking the bus.

As a country girl, public transportation always makes me a little nervous. This is where google maps saved me. I figured out that if I plug a destination into google maps and click the “transit” icon, it will tell me exactly where to walk and exactly what bus to take. And the price. $2.75.

So I tried it, and it worked quite well. Once my phone didn’t update fast enough, but I could see from the street sign that I was at the right stop, so I hopped off. Whew! I made it to Micaela’s apartment just fine.

She opened the door. Smiled. Her curly hair spilled down over her shoulders. “Hi,” I said, nervously, because I was suddenly nervous. Why was I intruding into this stranger’s home? I’d meant to keep in touch after we’d met, two and a half years ago, but I hadn’t. Not really.

She led me upstairs to her cute little (blessedly air-conditioned) apartment. Her husband, Hai, was chopping veggies. Rice noodles bubbled on the stove. Were they cooking me Vietnamese food? Okay, maybe this was a good plan, after all.

We began making small talk. Hai went outside to grill.

“Okay Micaela,” I said. “The last time we were together you pointed out this guy named Hai, and you told me he was your ex-boyfriend…that you’d dated for a week but then you broke up with him and you didn’t know why you ever gave him a chance…that he was just too ‘cool’ and flirty and stuff…but now you’re married to him and pregnant with his baby. I’m so curious to know what happened.”

I was sure it was going to be a good story, and it was. Micaela told me about how she’d had an “ideal” man in her mind, a “serious” man that Hai didn’t live up to. But the journey of discovering who Hai really was, (and who she really was) and what God actually had in mind for her, was this beautiful journey. I just LOVE Anne-and-Gilbert stories like this.

The meal prepared, we sat down to eat. Hai prayed. “Thank you that Emily can be here in Seattle to…well, um, actually I’m not quite sure why she’s here…”

Right. Maybe I should explain that.

I gave them the whole “Elon Musk used to randomly call interesting people and invite them to lunch” and “I went to see Howl’s Moving Castle last December” and “I want to know how to be a playwright” backstory. And then I talked about they guy on the street who said that Mennonites are “basically Amish, except, you’re cool?” And Hai wanted to know what exactly a Mennonite was (Micaela was more familiar with Mennonites because she’d done Rod and Staff homeschooling curriculum) so I launched into that backstory.

“So what do you do, Hai?” I asked, then. As he told me about his crazy adventures as a security guard, I was finally able to eat my food. It was fantastic. So top-notch. I stuffed myself.

We’d agreed, near the beginning of the meal, to go to a lake after dinner and float on inner tubes for awhile. I was too tired after my long day to do anything fancy. But now that we’d uncorked the flow of conversation we couldn’t seem to stop it. Suddenly we were talking about how to learn another language, and how to talk to homeless people, and what enneagram we all are. (“You’re a 5, right?” Micaela said to me, and I was super impressed.) Then we looked at the clock and were like, “meh, we’re no longer young. Let’s just go to bed.”

I slept in the next morning, and then ate banana muffins, drank lavender-infused tea, and had more great conversation. The strangers of yesterday felt like old friends, again. There were so many interesting things left to say, but suddenly it was 10:00 and I wanted to make sure I got to my 11:00 meeting on time.

And so, backpack freshly packed and pinned, I set out on the town again.

I correctly navigated all my stops and transfers until, at the edge of downtown, I got off at the wrong stop. Oh great. And I was already going to be a bit late. I tried to get google maps to re-route me. Surely that wouldn’t be so difficult? But something was glitching, and google maps was telling me that it would be over an hour until I reached my destination. Huh? That literally makes no sense, Google. I’m already downtown.

Looking up, I decided to go the old fashioned route. I was on 8’th street. All I had to do was walk down to 1’st street, and then up to Clay.

So I booked it.

I mean, as much as I could while still having to wait on “walk” signals and such.

I was ten minutes late. Could be worse. I walked into the coffee shop and there was Justin Huertas in the flesh, sitting at a little copper-topped table.

He looked up. Grinned widely. “Hi!” Gave me a hug.

Justin, it turns out, is one of those people who can instantly make you feel like an old friend. I apologized for my lateness, explained the bus mistake, and went to order some tea. Then I sat back down, and asked him to tell me all about how he came to be a playwright.

His path to writing plays was very interesting and non-linear, with lots of random setbacks and challenges. He didn’t set out to be a playwright, and actually ended up changing his career path several times. But what emerged from his story were several fascinating insights into the career of play writing.

“But it sounds like you have a better chance of getting a commission to write a play if you’re already in the system somewhat,” I said.

“Unfortunately, that’s true,” said Justin. “A lot of it is who you know.”

Secondly, play writing is a more collaborative process than book writing is. Justin talked about something called “workshopping,” where the playwright brings in a scene, the actors read it, and then everyone discusses what works and what doesn’t. He suggested that I could mimic this process by getting together with friends and having them read drafts of my plays out loud. Scary! But helpful, I’m sure.

The last insight was one which extends beyond the realm of play writing and into any sort of artistic endeavor. It was this:

People achieve artistic success because other people believe in them.

This was one of the strongest threads binding Justin’s story together. Someone higher-up in the theater business believed that he had a story to tell, and invested in him. That’s how he became a playwright.

I was really struck by this. It reminded me of the people who have believed in me over the years. Like when I took Creative Drama for Teachers at community college, and the teacher, Tinamarie, who was an honest-to-goodness actor and director of real plays, believed that I had what it took to act. Little Mennonite me!

Or last year, when I wrote a play of the life story of the Apostle Paul for our Vacation Bible School. Shannon Krabill told me that she wanted to affirm me in my play writing because she saw that God had given me a gift. That meant so much to me.

I think that any artistic Mennonite feels, first, that their gifting may not be a practical pursuit, and second, that they could never “make it” artistically in the non-Mennonite world. We’re farmers and homemakers. What do we know of art?

But beauty was created by God. Art, and music, and storytelling are these beautiful and powerful things, and when we see these talents in others, we need to affirm them. These things matter.

I talked with Justin about these things for a good bit of time. I told him about some of my ideas for plays, and he seemed to like them. “I want to be a resource for you,” he said.

I appreciated that a lot.

Eventually though, after a fantastic conversation, our tea cups were empty and we parted ways.

I began meandering my way back to the train station. In doing so I ran right into Pike Place Market again. A different end of it, with crowded vendors spilling into the streets. I was so confused by that market. I’m used to markets that are in empty lots, with booths/tents set up in straight rows. This was such a conglomeration of indoor, outdoor, permanent, and temporary shops, that seemed squeezed into the middle of town. I’d like to explore it further sometime when I’m actually at leisure to buy things.

I wanted some food for my lunch and supper, but had no time to sit in a cute restaurant to eat it. Also, I didn’t want to spend a lot of $$$. But there was a random 7-11 tucked into a street corner, so I bought two slices of pizza for $2.20.

Yes, I was proud of myself for spending a weekend in Seattle and only spending $2.20 on food (if you don’t count my cups of tea). I’m sure all you foodies out there are shaking your heads (I’m looking at you, Rachel). But I did get a home-cooked Vietnamese meal, so don’t be too hard on me, ‘k?

Back at the train station I was given a seat assignment, for some reason, but my outlet didn’t work. So I asked the conductor if I could move, and he was like, “sure, take any seat in this car.” Train people are so chill.

Across from me were two ladies in their 50s who got sillier and sillier as their beer bottles emptied. The one began to talk about dating a 26-year-old guy, and how her daughter, who’s also 26, was super weirded out. Ha. Yeah, I’d imagine so.

Ah, the adventures of riding the train. Nothing this interesting ever happens when you drive.

I got off at the Albany station and drove home, feeling full. The asking had paid off, 100%. Not only had I had some fun adventures alone, but I’d had some extremely fulfilling conversations. Micaela, Hai, Justin…they all were such kindred spirits, after all.

“Look me up if you ever come back!” they’d all said.

And I think I will.