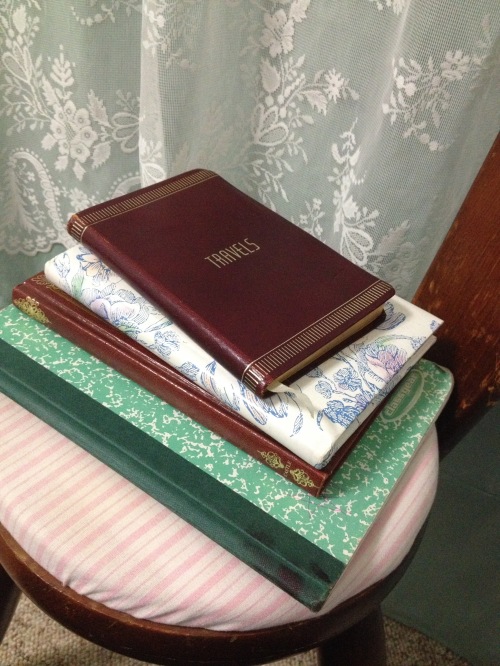 This is my current collection of other people’s diaries. I find them at garage sales sometimes.

It’s absolutely fascinating to me what makes people choose to write down one thing and not another. A diary must be the closest thing to glimpsing the actual inside of a person’s brain.

Mostly, I’ve found, people write down astonishingly boring things about themselves. Linda came at 9:00 to clean house. We left at 1:00 to drive to Olympia. Beautiful day! Beautiful trip! Got to Stephanie’s a little ahead of time.

And then every once in a while you’ll find a humorous story, but not be quite certain whether or not the diary writer was trying to be funny:

Took my antibiotics and went to Dr. Wilde for a root canal. Debated with him whether it was the same tooth Dr. Parley had done the root canal on last  year. He had x-rays to prove that was a different tooth. I was angry and unconvinced but I guess I must have been wrong; so I paid $159.50 today. I think he must have been right but in my own mind I felt sure it was the same tooth. I was quite upset about it the rest of the day.

I was telling my friend Esta about my fascination with diaries, and she suggested that I read the diaries of Anne Lindbergh. She then loaned me Bring Me a Unicorn, the first one.

Since autobiography has always been favorite reading for me, quite naturally I considered using this form. To write an autobiography would mean sifting, picking and choosing, shaping and cutting, and then putting the material into orderly chapters, finished portraits, and polished phrases. There is much to recommend such a process. …But there are certain drawbacks. What remains in the end is the point of view of a mature person only. At best–and its “best” is very good indeed–an autobiography reveals a glimpse of life seen at the end of a telescope, from a single stance, that of a woman in the last third of life.

…Once started on the painful journey toward honesty, with the passage of time one has increasingly the desire not to gloss over, not to foster illusions or to create fixed images, inasmuch as this is humanly possible. One wants to be an honest witness to the life one has lived and the struggle one has made to find oneself and one’s work, and to relate oneself to others and the world.

So I decided on publishing some of the diaries, along with letters, as a more truthful presentation of those years.

Diaries are written for oneself and reveal the writer as he is when alone.

Of course, Anne left a lot of the boring parts of her diaries out, and she really was a great writer who lived an interesting life, so there really isn’t any comparing her book to the diary of Beulah from Washington that I found at a garage sale. Except for that “diaries are written for oneself and reveal the writer as he is when alone” bit.

I’ve read Bring Me a Unicorn and Hour of Gold, Hour of Lead. And of course I’ve read classics like The Diary of Anne Frank and Zlata’s Diary. I don’t gobble up diaries the way I gobble up fiction, but I’m still very much interested in recommendations. I think I’ll do L.M.Montgomery next.

This entry was posted in Thoughts About Books and tagged Anne Morrow Lindbergh, books, Bring me a Unicorn, diaries. Bookmark the permalink.