Part 2: We Admire the View

As you may recall from reading part 1 of our adventures here, Mom, Jenny, Amy, and I woke up Friday morning to a very poorly functioning septic system. We dressed and primped, using as little water as possible, and then left to see the sights of Port Orford while the septic guys did their thing.

After a breakfast of free coffee, tea, and donuts at a local cafe (paid for by our apologetic property manager), we headed to the Port Orford coast guard station. The museum was down for repairs, but we saw the old lifeboat and the lovely views.

After that we visited the port of Port Orford, which was an interesting and odd place. Instead of having docks with rows of boats moored merrily in the water, there was one large concrete dock with boats in little wheeled carts. 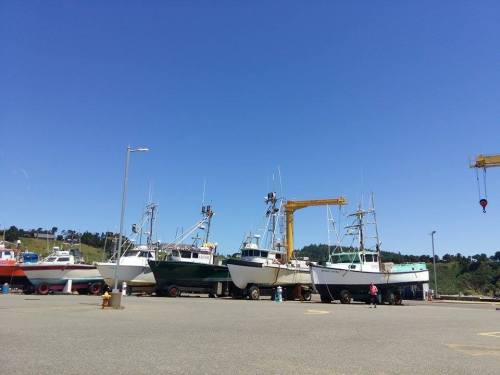 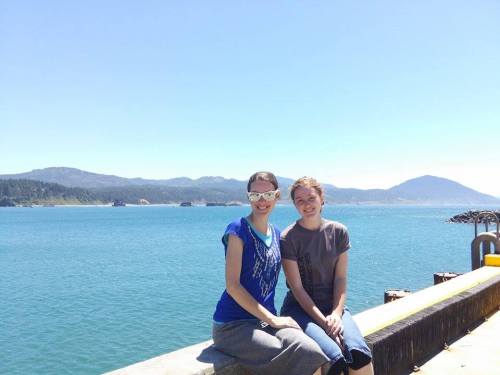 Every boat that docks here gets hoisted out of the water first with a giant winch.

After buying some iced tea at the little cafe on the dock and exploring some of the little Port Orford rocks and beaches, we decided to go to a thrift store at the senior center. En route, Jenny came down with a terrible case of hiccups. I tried to scare her (that’s a hiccup-curing tactic, right?), but her loud relentless hiccups didn’t budge.

We pulled into the parking lot and walked into the front doors of the senior center, trying to figure out where the thrift store was. In the next room over we heard some people talking, but no one was around where we were. But look! Some paper cups in a stack here, and a sink over there.

Now if you know anything about anything, you will know that the sure-fire way to get rid of hiccups is to slowly drink a glass of water while someone else massages your earlobes. So I, wanting to help my poor sister out, reached for a paper cup, intending to fill it with water for Jenny.

“EMILY *HIC*” Jenny whispered in the most yell-like whisper I’ve ever heard. “I’m NOT going to steal from the OLD people *HIC*.”

Mom and I burst into spasms of silent laughter.

We went outside, down the hill, and into the basement door to the thrift store.

“Do you have any water?” I asked the lady behind the counter. “My sister has the hiccups.”

“If you go upstairs to the senior center, the men there will give you some water!” she said.

Mom went upstairs and returned with one of the exact same cups I’d been about to grab for Jenny earlier.

After spending our morning and early afternoon jaunting around town, we returned home to a fully functioning toilet. We ate leftovers and sat outside in the sunshine. “I really like this place,” said Jenny.

“Really?” said Amy. “Because when we first got here, you two were kind-of homfey glomphy about it.”

I laughed. I hadn’t heard the term “homfey glomphy” in a long time. I think it’s one of those phrases that exists only in the dictionary of Mom. And Amy too, now, apparently.

That afternoon we relaxed, napped, roamed the beach, and read. Then, after supper, we went to Cape Blanco. Ah, Cape Blanco, one of my most favoriteist places. (I blogged about it when I went there with Ben last year. It’s also the location of my header photo.)

As usual, the beauty was astounding. 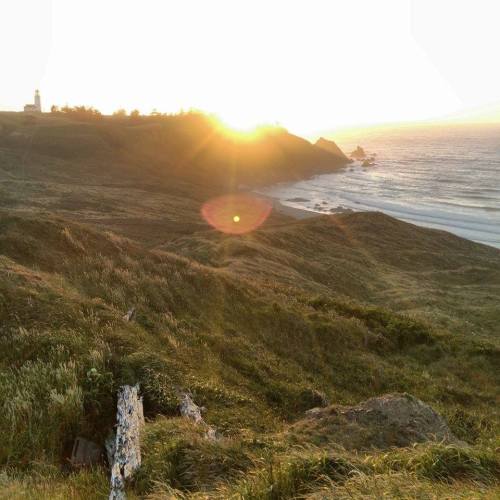 After watching the sun set multiple times from multiple vantage points, we headed home, where Mom built a campfire out of driftwood. We sat around it for a while, feeling introspective and dreamy. Then we went inside and watched Call the Midwife.

The next morning we packed up the car and headed out. We stopped along the way to tour the Cape Blanco lighthouse, which had been closed the night before, as well as a nearby old house/museum called the Hughes House.

And then we went home, over the mountains and back to the valley, for the first (and so far, only) really hot (100º) summer day.

It is so nice, I thought, as I looked at my mom and sisters, to have a group of people with whom  you know you will always belong, no matter what.