My Day in Candid Snaps

In an attempt to make a visually-focused blog post, I tried to take pictures of everything I did today. I was only moderately successful. Behold, my effort:

First, my morning routine began the way you all expected it would. 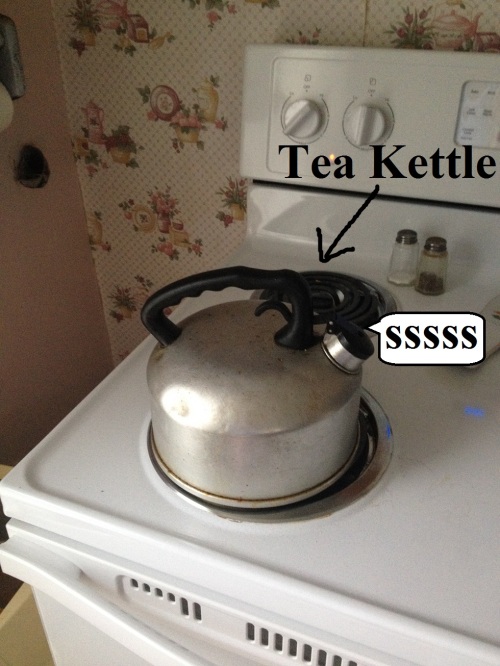 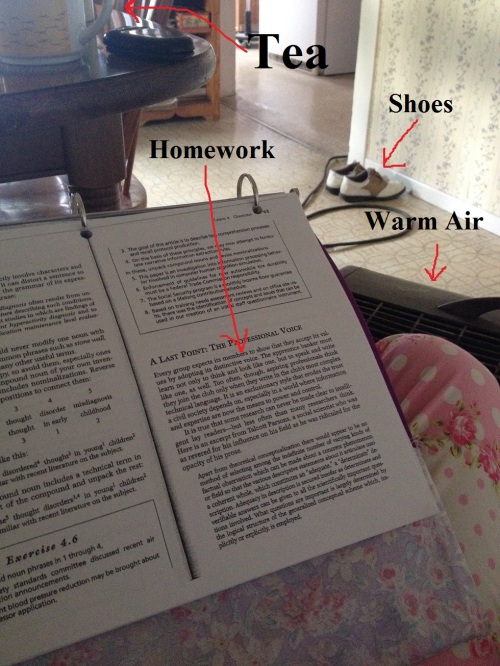 I made myself a breakfast of hummus and avocado on toast. It was kind-of meh. Next time I’ll go back to cream cheese instead of hummus.

I parked in the residential section of town, and walked to class. 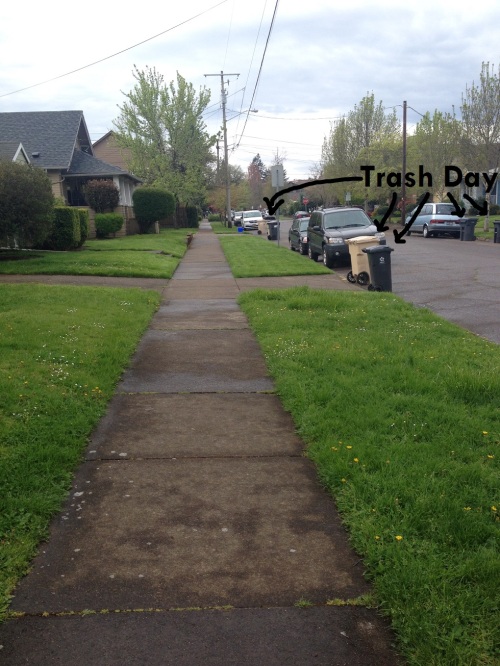 Oops, forgot to feature my tea in the picture. Let me fix that real quick.

I walked onto campus, and over to Shepherd Hall, where the Speech Communication department is housed. Shepherd Hall looks a bit like a fairy tale cottage. I slipped in the back door (circled in red).

My Ethnography of Communication class lasted 50 minutes, and then I headed over to the Memorial Union to eat lunch with a bunch of Christian professors and grad students.

At this point I completely forgot to take pictures, so I ran back later and snapped a picture of the sign beside the door.

Anyway, it was really interesting. The professors mostly talked about what it’s like to be a person of faith on a secular campus.

Presently I had to leave the interesting discussion and head to my Style and the Sentence class, where I suddenly remembered that I was supposed to take pictures of my day. I whipped out my phone and took a quick snap. 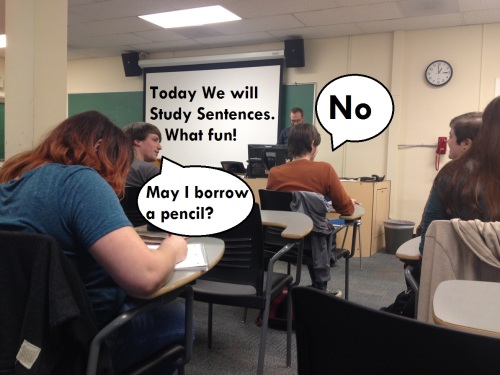 I mentioned the textbook for this class in my post about what I’ve been reading lately, and a commenter wrote, “I really want to know what weird things I do that muddle up my writing because I’m trying to sound smarter. Can you give some examples?”

Here is one example, from the textbook: “Once upon a time, as a walk through the woods was taking place on the part of little red riding hood, the wolf’s jump out from behind the tree occurred, causing her fright.”

This sentence is needlessly complex. The subjects of the sentence are “walk” and “jump,” and the verbs are “was taking place” and “occurred.” However, the characters are little red riding hood and the wolf, and their actions are “walking” and “jumping.” Making the characters into subjects and the actions into verbs simplifies the sentence tremendously.

“Once upon a time, as little red riding hood walked through the woods, a wolf jumped out from behind the tree, frightening her.”

It seems like a simple rule, but you’d be surprised how often writers take the actions and turn them into the subjects, writing things like, “Our lack of data prevented evaluation of UN actions in targeting funds to areas most in need of assistance.”

So. Style: Ten Lessons in Clarity and Grace, by Joseph Williams, is about things like that.

Anyway, during class we got into groups and did sentence deconstruction worksheets, and then class ended and the rain began.

I had an hour to kill until my next class, so I went to the library and got online.

My Advanced Intercultural Communication class was originally in Shepherd Hall, the fairy tale cottage I mentioned earlier, but the classroom was too small so we moved to Strand Ag. Strand Ag is technically a much nicer building than Shepherd, but honestly it always feels so cold to me.

After this I forgot to take pictures again. We read folklore in class, and discussed what inferences we can make about a culture’s values from their folklore. Fascinating.

It was raining really hard after class, and my friend Yasmeen walked me to my car because she had an umbrella and I didn’t. I told her that I’m not used to carrying umbrellas around. Oregonians tend to pride themselves on not using them. She thought that was rather silly.

Walking through a downpour with someone, trying to stay under the same tiny umbrella, feels kind-of like being in a three-legged race.

That was the end of my school day. I drove home, and Jenny was rushing around, headed to some event or other.

“I want to get a streetstyle photograph!” I told Jenny, because I liked her outfit.

She struck a model pose. 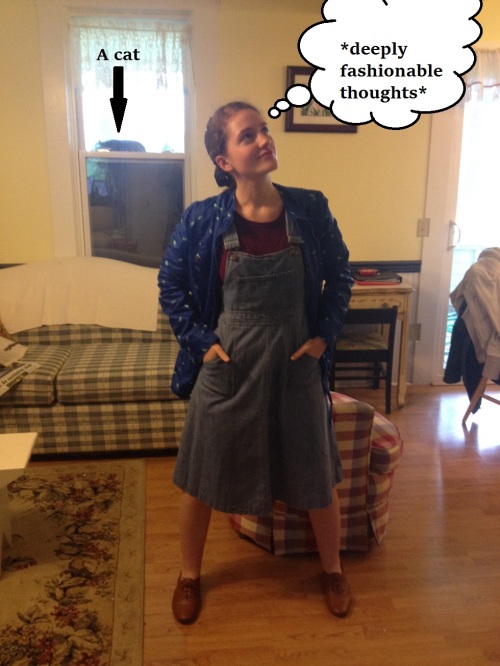 Everything I did after that was boring. It mostly consisted of eating spaghetti and putting random words on my photos using Microsoft paint.

So. That picture of Jenny was my last candid snap of the day.

April Blogging Challenge update: On day 18 (yesterday) Jenny posted a tutorial on how to bleach-dye a t-shirt. On day 17, Mom posted about fabric.

4 responses to “My Day in Candid Snaps”