I didn’t mind that my brother Matt had to work while I was visiting him in Washington DC, because Washington DC has many beautiful and free things to see. I set off on a muggy morning and meandered up the shady side of the street to the National Mall, past a huge United Mine Workers rally, through the lovely botanic gardens, and then finally up Capitol Hill to the Library of Congress.

“How are you doing?” asked a friendly security guard as I struggled up the hill, perspiration running down the back of my shirt.

Finally, sweaty and disoriented, I reached the Library of Congress. Through the door, around the corner, and down a long hallway I went, not paying much attention, just following the crowd. I stopped then, enthralled at the sheer beauty of this hallway. It was covered in art. Ceiling, floor, walls, everything.

Suddenly I noticed that everyone around me was dressed very nicely. Also, they were all wearing official-looking name tags. I got the distinct feeling that I had wandered down the wrong hallway and was somewhere I wasn’t supposed to be.

I left the hallway the way I’d entered, and there at the entrance was a sign I’d missed before in my heat-induced disoriented state. It advertised an international literary event. All the people filing past looked very important. Were they famous authors? I looked at their faces but didn’t recognzie anybody. I guess I should spend more time staring at book jacket photos.

I gave up and went to look at the Gutenberg Bible for a while. 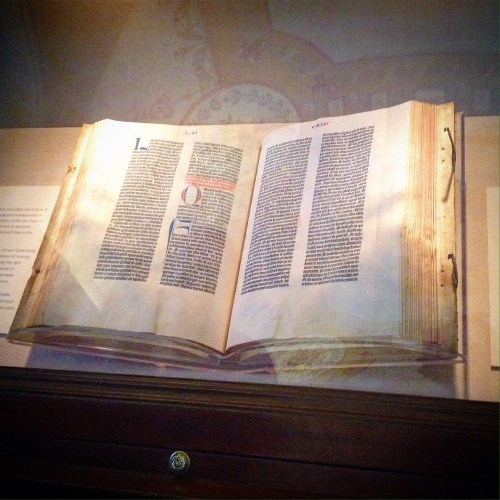 Still, the literary event kept nagging at me. If there was any way the general public could attend, or any way I could sneak in, I would never forgive myself if I didn’t try. So I walked down the enchanting hallway again, toward the open doors at the end that led to some sort of large meeting room. My t-shirt was soaked with sweat and I had a denim backpack instead of a calfskin purse, but I tried to look like I belonged as I sauntered past the table where name tags were being handed out.

“Excuse me, did you get your name tag yet?” One of the name tag table attendants asked me.

I could have come up with an excuse. “I just need to pop in and tell Katrina something, is that okay?” However, being an honest person, I said, “Do I need one?”

“I’m sorry, this is an invitation-only event,” she told me.

Oh well. At least now I knew. I exited the hallway once more.

Most of the actual books in the library cannot be accessed by the general public, but I began meandering around admiring the artwork and the book-themed exhibits. Aimlessly, enchanted, because the rest of the library was just as beautiful as that hallway. I felt a weird ache, and suddenly I wanted to cry. It was just that beautiful.

I’ve never in my life seen something so beautiful it made me want to cry. I’ve read about it in books, but never experienced it. (My camera was acting weird and wouldn’t let me take very many pictures, but you can get the general gist by doing a google image search for Library of Congress art or Library of Congress architecture.)

Finally I decided that if I wanted to see everything I would have to start in the basement and work my way up. 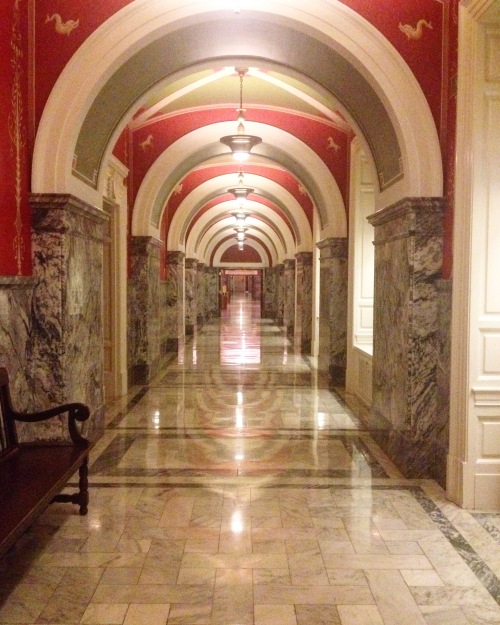 The basement was full of long beautiful hallways lined with locked doors. The doors had letters and numbers on them and I assumed that’s where the books were kept, sorted out according to some vast and complicated Library of Congress sorting system. The only part of the library that resembled a city library was the children and young adult section, where the books were on shelves and you could pull them out and read them.

I was exhausted, so I plopped down on a beanbag chair and read for a while. The perks of going places alone.

I suppose the Library of Congress gets a copy of every book published, even the advanced readers copies, because there was a whole table full of YA books that aren’t coming out until 2017. You couldn’t check them out, but you could read them.

The main floor had some ancient Bibles on display which I’d already looked at, as well as a map exhibit that didn’t look too interesting, so I went back to the second floor, where I was able to go out on a small balcony and look over the main reading room. This room is for people who are doing actual research projects, and when I saw it I decided that someday I’m going to come back with a research project, and I am going to sit in that beautiful room and look through stacks and stacks of books.

I was going to look at an exhibit about books that have shaped America, but first I went to look at Thomas Jefferson’s library in an adjoining room. Thomas Jefferson once had the largest library in America, but when the original Library of Congress burned down in the war of 1812 he donated his personal library as a replacement. 2/3ds of his books burned down in a subsequent fire, but his remaining books, as well as exact copies of the missing books, are on display.

As I was meandering around, thinking about how much this library was like Mr Norrell’s from Jonathan Strange and Mr Norrell, A library employee walked in. “This exhibit will be closing in four minutes,” she said.

Were all the exhibits closing or just the Jefferson Library? She didn’t say, but I quickly left to explore the books that have shaped America. Soon I was absorbed in reading summaries of The Cat in the Hat, and Zen and the Art of Motorcycle Maintenance, and The Fountainhead, writing down the books that I wanted to read. I meandered from contemporary books all the way back to Common Sense, and then I gave a satisfied sigh and turned around and saw that every single exit was closed.

Was I locked in? I tried the handles.

Was there another exit? I walked to the back of the room, where another row of doors led to the Jefferson Library. They were all locked too.

I imagined myself going all From the Mixed-up Files of Mrs Basil E Frankweiler and spending the night on the floor of the exhibit. Then I tried to think of the most non-dramatic way of exiting. Banging on the door? Calling 911? Waving out the window and hoping someone below saw me?

“I wonder if I can just unlock the door,” mused my practical side.

I examined the door again. There was a brass knob at eye level, so I twisted it. Click!

I tried the handle again. It opened.

A janitor was mopping the floor outside. I wondered if this was a common sight to him, people exiting exhibits that were supposed to be already closed. Maybe he was the one who had to answer the desperate knocks of those who tried banging on the door before they tried twisting the knob.

Was it okay that the exhibit was now unlocked? Oh well. I supposed the janitor could tell the appropriate people if it was a problem.

I’d spent so much time in the library that the day was now growing cool. I walked back to Matt’s place on the opposite side of the street, catching the shade of the setting sun.

Thus ended my adventure in the most beautiful library I’ve ever seen.

7 responses to “Trapped in the World’s 2nd Largest Library”