I spent six hours in the Denver airport on a layover, browsing the internet, reading the e-books I borrowed from the library, and trying to overhear people’s conversations. When the older lady next to me declared to her daughter that the grandchildren didn’t need any more gifts because “you already got them play dough and hand sanitizer” I laughed out loud and then tried to pretend that Huckleberry Finn was just a hilarious book.

I finally made it to Ohio as the sun was setting. My cousin Stephy met me at the airport, took me to the tiny town where they live, and showed me around her 100+ year old home. Besides being related to me, Stephy is one of my oldest and dearest friends. I’ve seen her off and on since she married Chris and moved to Ohio two years ago, but I’ve never visited her. 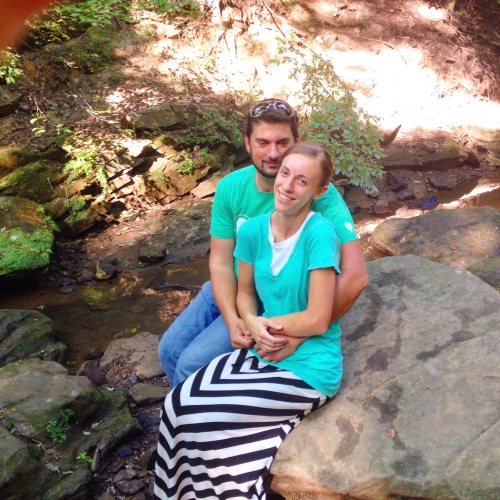 Chris and Stephy being cute.

“This is weird,” I said as we relaxed on the porch and watched the cars drive by. “I mean I’ve hung out with my married friends, but I’ve never, like, visited one of them, and stayed at their house.”

“It was really weird for me too, when I first had company, and I had to, like, make sure there was food to eat and stuff,” she told me.

The next morning, Saturday, we all climbed into the car and Chris gave me the Amish country tour. “This is where the first Amishman settled in Holmes County,” he said, pointing to a farm. Chris told me that the guy was his great great (I don’t remember how many greats) grandfather.

“Woah, so you’re descended from the first Amishman in Holmes County?”

“Yeah, well, pretty much everyone around here is descended from the first Amishman in Holmes County.”

“Are all of your relatives still Amish?”

“On my mom’s side many have left the Amish, but on my dad’s side they’re pretty much all still Amish.”

“Did you grow up Amish?”

“No, my parents left before I was born, but my older siblings were.”

I mostly found Amish country to be a completely bizarre urbanized form of the countryside. I’ve lived in the country most of my life, where in the winter you can see your neighbors’ houses across the large fields but in the summer the trees are so thick with leaves you really can’t. Houses only cluster together in the small towns that dot the valley.

Holmes County is different. Living in the country is part of the Amish identity, but there are so many around that they end up with houses right next to each other. A stoplight will sit on an intersection next to a cornfield. Chris told me that 150 acres is considered a really big farm in the area, whereas I’m used to an average farm being closer to 500 or so acres. Most of the Amish don’t even farm, he said. They get other jobs, such as building furniture. I guess furniture is a big Holmes County export. But they still kind-of-ish live on a farm because that’s the Amish thing.

Anyway. It was all very interesting.

The two of them also introduced me to geocaching, a nifty treasure hunting game where you use an app on your phone to find a small container hidden in a random place, containing a paper to record your name and the date, and sometimes a few trinkets.

There was supposed to be a geocache in this old horse shed but we couldn’t find it.

Our Sunday geocaching expedition yielded nothing, so Stephy took me around town Monday morning to some local geocaches she’d already found.

Can you spot the geocache on this old bridge?

They took me to an orchestra concert in the park, to the local “waterfalls” that dribbled down over the (admittedly very cool) rocks, and to an Amish bakery to buy a local pastry called  “cream stick.” But the beauty of the trip wasn’t in all the fun stuff we did, it was in the comfort and beauty of spending time with an old and dear friend.

We sat on the porch or in the living room and talked for hours. Remembering old times. Talking about how things are changing, and how much effort it takes to, as introverts, form close friendships with people we didn’t grow up with.

“I didn’t realize how much I missed you until you came to visit me,” Stephy told me as I was walking out the door Monday afternoon.

We had such a great time that I decided to stop in again, just briefly, before I fly back home. But for now, it was on to Lancaster County and the East.