Into the Thick of Things

I was an angel but I had no wings. I fluttered the tails of my long white sweater, hoping the children would get the picture. “I am an angel,” I announced, in case there was any doubt. “My name is Gabriel. I have come from God with a special message for you.”

I spoke slowly, enunciating clearly and using as few words as possible. “You will have a baby. He will be the Son of God. You must name him Jesus.”

“The Son of God!” Amy, or should I say Mary the mother of Jesus, exclaimed.

The Thai schoolchildren sat in rows on the floor, watching us. Levels of comprehension varied, as we tried to present the Christmas story visually, with Ben acting as both Joseph and the Shepherd, and a vase wrapped in a sheet and pillowcase standing in for Baby Jesus. 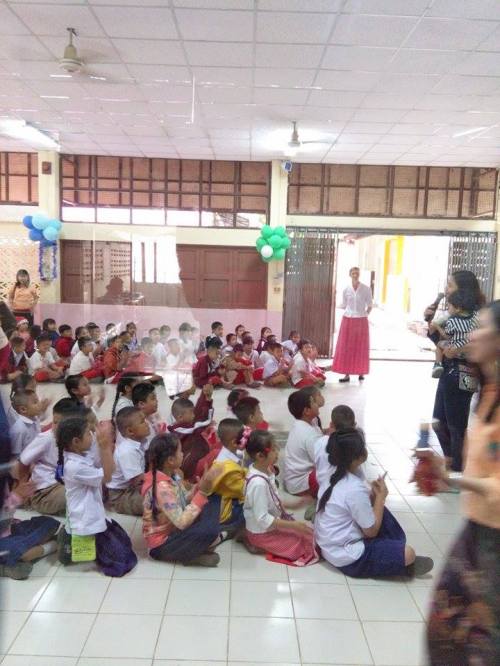 When we arrived in Thailand Wednesday evening, Ben and I had no idea this trip would require us to be actors. Amy sprung it on us as we sat in her living room and ate soup, trying to recover from our two-and-a-half day journey. “By the way, Kimberly volunteered us to act out the Christmas story for the children at the school where she teaches.”

Kimberly, Amy’s roommate, looked up indignantly. “I asked you. ”

“Well, yeah, I guess. And I thought they’d like to do it. You like acting and stuff,” she said, turning to me.

“Also, Friday evening,” Kimberly put in. “Chad and Jenny are doing a Christmas party, and they want you to act it out there too.”

I do like doing that kind of thing. Both aspects. I like coming up with skits, and I like being thrown into the thick of things when I come to visit a foreign culture. I like hastily constructing costumes out of broomsticks and old sweaters, and I would rather make new Thai friends than go to a popular tourist location and get kissed by an elephant.

This trip has been particularly fun because I’ve been to Thailand before, so I don’t have to start at square one when it comes to friendships.

It began Thursday evening, after a short partial day’s rest from our travels. “Do you remember Leila? And Ahn? They work at the college.” Amy asked me.

“We’re having a mookata party tonight, and they’re coming. Also, my friend Amy whom you’ve never met. And Kim. Remember Kim? You helped her with her homework last time you where here.”

We rolled out rice mats in the driveway for sitting on, and took the floor lamp outside for extra lighting. Leila, Ahn, and Leila’s husband showed up first, bringing veggies and raw meat and mookata grills. Mookata is a traditional Thai dish in which you fry meat and veggies and boil more veggies in the broth. The idea is to spend half the time cooking things and the other half eating, plucking things off the grill with chopsticks and trying different flavors together. 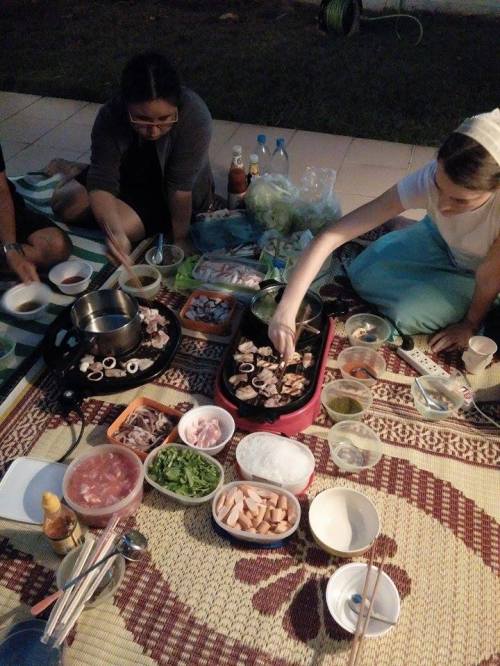 It ends up being a sort of potluck, with everyone bringing something new to fry and stew. I fried and stewed and chatted and fried for hours.

“Are you all ready for your skit tomorrow?” Kimberly asked when all the guests had left and we were mopping up the grease that had drifted into the house and settled on the floor.

“Wait, that’s tomorrow? What time are we starting?”

Ben, Amy and I gave each other exhausted glances. “I’m tired. How about we get up early tomorrow and do it?”

“Sounds good to me.”

It was settled, then. We got up early in the morning and tried to figure something out.

“Okay, Mary, you start out over there. Joseph, on the other side. I’m the angel, so I’ll come in this direction and tell you you’re going to have a baby…should I make a gesture of a pregnant belly or of rocking a baby?”

In roughly half an hour we scraped together a passable five-minute skit of the Christmas story, in relatively comprehensible English. I donned Amy’s white dress and sweater in order to be an angel, and we transformed Ben from Joseph to Shepherd mid-skit by handing him a straw hat and a telescoping mop handle. (The telescoping part was important–all props were transported by motorbike.)

Amy’s roommate Kimberly teaches classes for the English program at a local government school. A friend of Kimberly’s was putting on an hour-long Christmas program for the whole school, with songs, gift-giving, a craft, and, of course, a short skit of the Christmas story. Only one or two grades could fit in the assembly room at once, so the whole program was repeated five or six times.

As we were relaxing after one of our performances, I heard Amy laughing.

“The teacher asked a student, ‘do you know what a shepherd is?’ And the student said, ‘Santa Clause!'”

We had to do the skit again that evening at Chad and Jenny’s Christmas party. Chad and Jenny are Amy’s co-workers, and they invited some university students over. I pulled out the bags of marshmallows I’d brought Amy from the states and whipped up some Santa Rudolphs for the occasion. 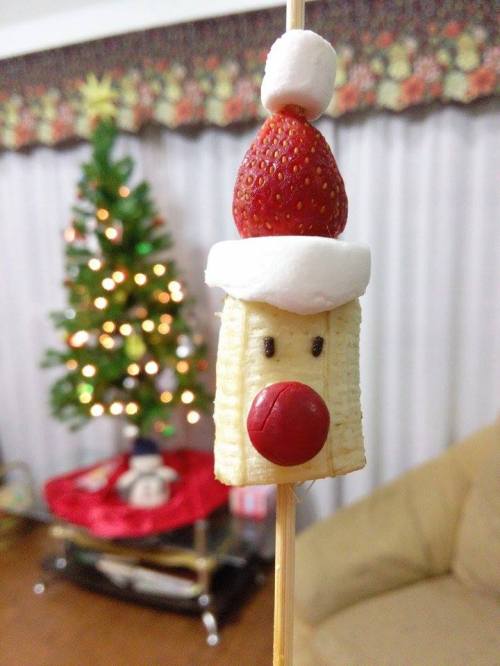 It was a little weird doing the skit for university students since we’d geared it towards children, but it went fine. We rounded out the evening with decorating Christmas cookies, reading the Christmas story, and trying to unwrap a Christmas present while wearing oven mitts.

I was exhausted after that party. “Are you all packed for tomorrow?” Amy asked me.

“What? Packed? Are we going somewhere?”

“We’re teaching at English camp! Didn’t you read my email?”

“…I skimmed it. I didn’t realize we were spending the night there.”

“Well, we are. We’re leaving tomorrow morning, teaching all day, spending the night, and teaching the next day too.”

“Wow, you really threw us into the thick of things right away, didn’t you?”

It was okay though. I like being thrown into the thick of things.

Coming Soon: Adventures of Teaching an English Camp at a Thai Safari.

This entry was posted in Travel and tagged Christmas, Thailand, travel. Bookmark the permalink.

One response to “Into the Thick of Things”