My Grandpa is so Beachy

My Grandfather has been living with us this summer. At 97 years old he still enjoys the occasional adventure. On that note, we went on an outing to the beach Saturday. 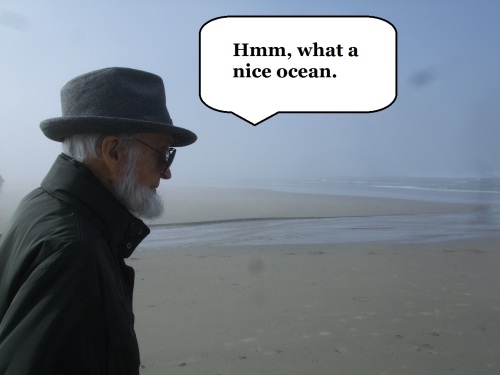 The boys and Dad were busy, but Mom, Grandpa, Jenny and I packed a picnic lunch and took off.

It was a beautiful sunny day, until we actually arrived at the ocean. There, a shivery misty breeze hovered over the water and along the sand. I got out of the car and immediately hopped back in, chilled to the bone.

Mom and Jenny looked at me questioningly. “Why didn’t you bring a coat?”

“Um, I thought this long-sleeved shirt would be warm enough.”

They rolled their eyes. How could I have lived in Oregon for so many years and not know something as basic as “always bring a coat to the beach?”

Mom helped Grandpa into his coat, and the three of them began the slow shuffling treck across the sand to the water’s edge.

I stayed behind in the car for a while. Then I got a brillient idea. I could wrap up in the picnic blanket to stay warm!

We didn’t stay on the beach for long, due to the aforementioned chill. Before long we headed to the Marine Sciene Center, where we perused various exibits and saw a film about dolphins that Grandpa really enjoyed.

We had a bit of a dilemma about our picnic. How could we have a picnic when the beach was so chilly? We decided to go to the south beach, hoping the jetty would shelter us from the cold wind.

Unfortunately, we had underestimated how long of a walk it is from the parking lot to the beach, and how difficult it is for an elderly man with a cane to walk up and down sand dunes. Eventually we decided to settle between two little dunes along the path. It was nicely out of the wind, but all the tourists visiting the beach or the jetty walked right by us and stared. Jenny spent some time on the far dune, hiding from their prying eyes.

We set up a flimsy camp chair for Grandpa, and the rest of us sat on the blanket. Midway through the meal Grandpa’s chair began tipping sideways, slowly but surely.

I reached out a hand to try to stop him, but it didn’t really do much good. He tipped all the way over and landed in the sand. Not a bit of food had fallen off of his plate, and he hadn’t spilled a drop of his tea.

Me: Did you really stop and take a picture while Grandpa was falling over?

Mom: No, I took a picture while you were pushing him back up.

We did a bit of shopping, and then came home. During supper Grandpa said, “I really enjoyed that film we saw about porposes.”

“It was about dolphins,” said Jenny.

“Oh. What’s the difference between a dolphin and a porpose?” asked Grandpa.

None of us really knew. Ben said, “I think dolphins have a slightly longer nose.”

“Oh,” said Grandpa. “Well, that film reminded me of when I was on a freight ship headed for Paraguay. I don’t know if it was dolphins or porposes that we saw, but they would go to the front of the ship, and play, and play, and we would all watch them.”

He smiled at the memory.

7 responses to “My Grandpa is so Beachy”