This year, for Spring Break, four of my childhood friends and I piled into a minivan and drove to Colorado.

2. To hang out in the Colorado sunshine and do whatever.

So far the plan has gone swimmingly, except for the fact that most of the hanging out has been in places with no wifi. I’ve been longing to post pictures.

That’s one thing I learned in my journalism class last term. Always post pictures on your blog. It makes it less boring.

Stephanie decided to be spontaneous and fly to Ohio today instead of driving home to Oregon with us. Her man lives in Ohio, in case you wondered why anyone would want to spontaneously fly there.

Everyone took her to the airport, but I stayed back, thinking I would visit my best friends from when I lived out here. I wanted to believe that I have very good directional skills, so I didn’t ask anyone how to get there. I just started walking.

I took several wrong turns, which was okay because the day was brilliant. When I finally made it to my friend’s house, I found that no one was home. I went inside anyway. The dog barked and growled at me for a while and then fell asleep. I got online.

And…I didn’t have my droid on me. My droid with all my pictures. So you’ll have to be satisfied with the two randoms I scavenged up. 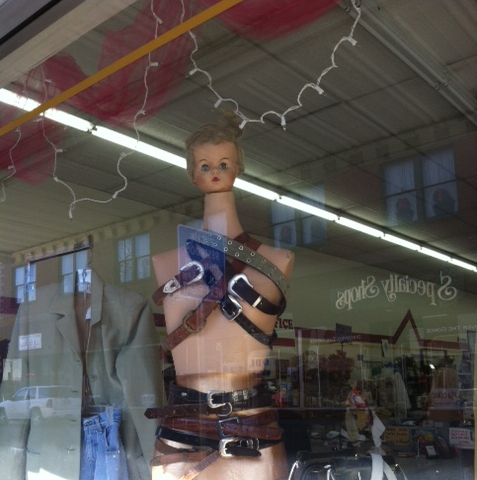 On our way to Colorado we stopped in The Dalles. We went into an extremely bizarre thrift store, as you can see by the manikin shown in the above picture. The store was selling a book of beauty spells. I didn’t know such books existed outside of fairy tales.

In real life they’re creepy and occultic, not fairy-tale like. Just sayin.

Yesterday for breakfast we went way back in the boondocks to this wild west restaurant on a mountain. It was quite the place. There were dogs inside the restaurant, the coffee pot was 100 years old, and the couple who own the place sat down at our table and joined our conversation.

Preston and Justin sipping their coffee. Ironically, this restaurant was one of the few places we’ve been that’s had wifi.

That’s all for now, folks. Hopefully more pictures and stories will appear on Saturday.