The point of our road trip was to go to my cousin Janet’s wedding. To understand what made this wedding so special, you will have to understand some things about my family.

First, when I post about family gatherings and hanging out with cousins and stopping in to see an aunt or a grandmother, I am almost always speaking of my Dad’s side of the family, the Smuckers. The Yoders, on my Mom’s side, are quite different. Managing to gather a group of Yoders in one place is rare, but oh so special.

Second of all, six years ago the Yoder family was rocked to the core when my cousin Leonard committed suicide. Leonard has two sisters: Annette, who was married at the time of his death but was unable to have children, and Janet, his little sister who looked up to him more than anything.

This summer, God has been redeeming and blessing the Yoder family in a way that is amazing to behold. First of all, after seven years of frustration and tears, Annette and her husband Jay were able to adopt a breathtaking baby boy named Justice Creed. Secondly, Janet is getting married. The family that lost a son is gaining a son-in-law. The girl who lost the man who she looked up to now has a man to look after her and care for her the rest of her life.

My Aunt Anna with her grandson, Justice Creed.

Rounding out the cast list are me, my parents, and my siblings Matt, Amy, and Jenny. Also, my uncle Fred and my Aunt Rebecca. Fred, Rebecca, Mom, and Marcus are all siblings.

And now, for pictures.

Amy, Jenny and I dressed in wedding finery. I had to stand just so on that dock so my stupid spindly heels didn’t go down the cracks. I just knew that if there were any handsome single men at that wedding they were going to think, “oooh, she’s the kind of girl who buys shoes she can’t walk in. So not interested.”

My real excuse is that I’m too cheap to buy myself nice white sandals, and instead borrow my sister’s and wobble. 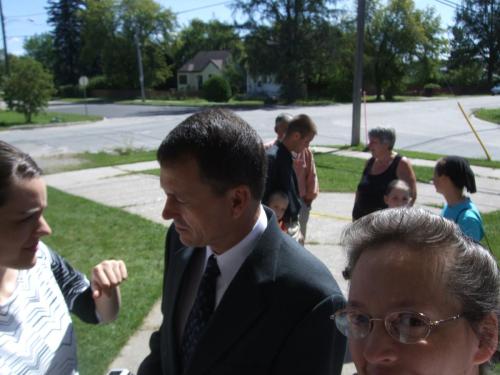 Apparently I tried to delicately punch uncle Fred while we walked into the church. This picture just cracks me up.

The only camera I have access to right now is my Mom’s, which doesn’t have good pictures of the ceremony. However, I decided to post one blurry one, with notes telling you who is who. 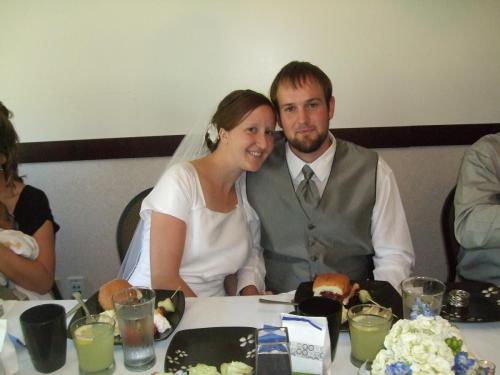 Finally, a good picture of the cute-handsome-nice-funny-amazing-affable-benevolent couple.

Uncle Fred takes a picture of bridesmaid Annette in her beautiful wedding finery.

The bridal table. Janet the bride looks intently at her chair. Annette and Jay look intently at baby Justice. The two random members of the bridal party also look at their chairs, which leads me to believe that the whole lot of them wanted to sit down.

After the wedding was over, and Janet and Mark were safely off on their honeymoon, mom and aunt Rebecca went over to the place where Annette was staying so they could hold beautiful baby Justice for the first time.

If only I had brought my own camera, or charged my droid and dragged it around with me, I could have brought you pictures of the summits I climbed, the lakes I canoed across, and the sunsets I observed during my short two days in beautiful Canada. But I didn’t. So I can’t.

I can, however, post a few more pictures of the good family times we had this afternoon.

Marcus, me, Jay, and Annette sit around a table, intending to talk to each other. However, we just cannot keep ourselves from staring at Justice instead.

Now, here is a twist in the good old plot. Jay, Annette, and Justice were planning to fly back to Pennsylvania tomorrow, while the rest of the Yoders (minus Janet, obviously) went back to Minnesota for a bit of family time with Grandpa and Grandma.

However, this morning, the day after Janet’s wedding, Janet’s Grandma on her Mom’s side died. Which means that Annette and Justice are coming to Minnesota as well, and Janet is cutting her honeymoon short and coming down for the funeral.

Although they’ve been expecting her death for a while now, it strikes  me as such a bizarre turn of events. A wedding, and then a funeral, all in one trip. Granted, I didn’t know the woman who died, and therefore probably won’t go to the funeral. But for Marcus, Anna, Annette, and Janet it will be. A birth, a marriage, and a death, all in one summer.

I must get to bed, as I am road-tripping to Minnesota tomorrow. Prepare for more styles and miles coming your way.

5 responses to “Weddings and Families”