“73 notebooks? What could you possibly do with 73 notebooks?” my Aunt Rebecca asked, amazed.

The truth is, I sometimes wonder that myself.

I’m going to guess that I had thirteen or so notebooks here in VA before the boxes came. It wasn’t enough. I missed my piles of notebooks away in Colorado more than anything. So when my friends from CO set out to attend night of music at SMBI, which I also planned to go to, I arranged for them to bring some of my notebooks along.

The snow made the plans a little more complicated. But eventually I received the two boxes containing 73 notebooks. It’s not all of my notebooks by any means. I have more in Colorado, but this is the majority.

A favorite author of mine once said that childhood is on one side of a river, and adulthood on the other. After you cross the bridge from childhood to adulthood, the bridge is burned, and all you have to figure out what you were like back then is a vague figure waving from the other side of the wide river, and whatever you wrote.

In some ways, that’s what fills my notebooks. Me. Poems, songs, stories, drawings, thoughts, dreams, but all of them point to who Emily used to be. And for some reason, perhaps because I really want to be a middle grade fiction writer, it is all exceedingly important to me.

Example: In one of my older notebooks, I have what is perhaps my oldest surviving story, told mostly in pictures. And I can still remember sitting there, explaining it to my mom after I wrote it. 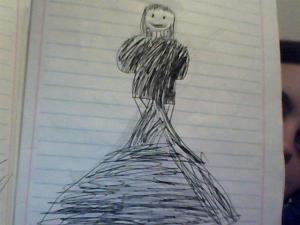 This is Amy with a rock on her head.

This is Matt laughing, cause he put the rock on Amy’s head.

Mom: what’s that thermometer thing in his mouth?

This is Amy saying “no!” because Matt laughed at her.

(the implication is that she punished both of them, although on reflection that doesn’t make a whole lot of sense.)

Besides demonstrating how I’ve grown as a storyteller, this story also brings to mind the days when Matt and Amy did fight a lot, and both got punished when Mom got involved.

Later in the notebook is a song I wrote to the tune of old McDonald. I think the original plan was to give it to Mom for her birthday or something, but I’m glad I didn’t, as it paints my siblings in a rather unflattering light.

With crayons scattered over here,
And some perfume over there,
Here a pull-up
There some lotion
Everywhere is a great big mess
Mother Smucker had some kids
Lord help me amen

I went on to describe Ben as “with a whiney whiney here, and a floppy floppy there.” Amy was, “with a disagreement here, and a worn-out shoe out there, here some fabric she does not like, always wanting to go shopping.” As for Matt, it was “with a messy room right here, and a gelled-up comb right there, here a job down at the warehouse, everywhere negative comments.”

The thing is, I really had forgotten about that time. When Jenny was into everything, leaving messes everywhere. This was obviously pre-Steven, when Ben was bored all the time, and whined and flopped about everything. Amy went through the “I have to be cool” stage and had all kinds of tiffs with mom about clothes. Matt started using copious amounts of gel in his hair, and was bluntly honest about everything.

Reading the song, I remember that stage of my family like it was yesterday. But without the song it fades into the back of my mind, perhaps never to resurface, or only in bits and pieces, like if I see a comb with gel all over it.

But maybe the question is, do we want to remember?

Endnote: SueP, thanks so much for the book recommendations! Now I can’t wait to go to the library! And for anyone else who’s interested, I would love to get your recommendations for books/authors to check out.