A couple weeks ago my cousin Bird (she changed her name and I still can’t get used to it, ha ha) sent me an idea for a blog post: having an interview interview, where she interviews herself. I was immediately fascinated, since Bird is a fascinating person in general. I was also fascinated by the idea of blog readers suggesting post ideas, so if you have some you can comment them or email them to me at Jemilys@gmail.com.

hello bird. how are we doing today?
pretty good. you know, this is the first time the question “how are we doing today?” has ever made sense to me.
indeed. although it does seem a bit strange that we’re plural now.
indeed.
i understand that your new project is interviewing people.
yes! in my travels and adventures i’ve encountered people with the most amazing stories to tell, so i’ve decided to conduct a series of interviews and put them all together in some way, like a website or a zine. although i’ve occasionally interviewed friends in the past, this is really the first one that i’ve done formally- i mean that you’ve- er, we’ve done…
what sort of interviews have you done or planned to do?
well, i am interested in the way people think differently and how it feels to be human. the first interview that i ever did was with a professional wanderer who answered “A WOLF” when i asked “who are you.” from there i just made up the questions as we went along. i asked something i have always wanted to know about other people: “when you think, do you hear the words enunciated in your mind like a voice speaking your thoughts?” and that led to a whole conversation about the different ways that thoughts are understood. and with these interviews i just want to continue to create those kinds of conversations.
interesting. a professional wanderer?
it’s the job i’ve always wanted.
what other kinds of people do you have lined up for this project?
so far i am planning to speak with an animator, a belly dancer, and a couple of stand-up comedians. but anyone who would be interested in being interviewed is welcome.
who do you wish you could talk to?
a lot of people who i have no way of contacting anymore, like an old co-worker from oregon who took me to her church a few times because she was trying to convert me to the pentecostal faith. i went with her because i was fascinated with watching people speak in tongues. it would be cool to interview her about what it’s like to do that.
what was it like to see that happen?
it was kind of amusing/frightening. i noticed that there were a lot of different styles. some of the older people in the congregation seemed like they were deeply in trances, moaning really deep guttural nonsense words. other people looked like they weren’t really sure about what they were saying.
wow. are there other things you’ve done for the sake of adventure that you wouldn’t normally do?
hmm. i once learned how to breathe fire, not intending to use that knowledge for the rest of my life.
how do you breathe fire?
it’s tricky but not quite as dangerous as you’d think. you’re basically just spitting out a mouthful of lamp oil over a flame.
doesn’t sound very tasty.
it isn’t.
what are some other magical things you’ve encountered that you’d like to share with the world?
i’d like everyone who ever goes to portland, oregon to visit the street corner on SW 21st and hoyt. there you will find the good karma box. [photo attached] open it up and find random toys, books, junk, letters, and surprises. leave something of your own if you want. i once found a drawing from someone named russell who left his address on the back, so i wrote to him and we became penpals. he lived in texas. 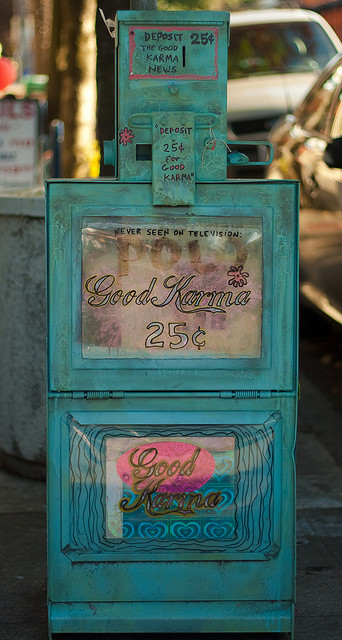 you are also living in texas these days. have you ever met russell?
no, we fell out of touch and i lost his address. it’s sad how people can disappear from your life, even when you never met them to begin with. but there are always new penpals to be found.
of course. who is your favorite penpal?
postsecret! [link: postsecret.com] i send postcards every chance i get, and have been happy to see my secrets on the website once or twice. one time on the back of a postcard i wrote “dear frank: if you do not publish this secret, please give my address to someone who would like to have a penpal.” and bless his heart, he did. i started getting mail from someone named garrett who sent me a lot of cowboy stickers.
that was very nice of him. well, i meant that was nice of frank, but it was also thoughtful of your penpal to send you all those stickers.
there were just so many that i had to put them in the good karma box.
i’m sure someone else will appreciate them.
hopefully.
maybe your next project could be creating a good karma box where you live now.
i’d love that! every city should have one.
so is portland the most magical place you’ve been? do you ever get homesick?
people ask me those questions a lot, especially cause west texas is so different. i like the desert and don’t get homesick, but portland is always close to my heart. one thing i will always remember fondly is a little room in the public library called the sterling room for writers. it’s a quiet space that smells like oak and old books, where writers can go to write.
was it more inspiring to write there?
well, to be honest, it did feel like there was a lot more pressure to be literary and important in that room. i mostly went there to be spy on other writers. they seem to have quirkier habits than the rest of the population.
such as?
like, being very particular about the position they are sitting in to inspire the best flow of creativity. and the sort of writing instrument that they used. i myself can only write well with a .005 pen, but other people insist on, say, blue ink, or a certain kind of pencil, or prefer to use a laptop. and also there was one man who would write for about 20 minutes, get up and pace around the room, and keep repeating the process. i’ve always wondered if he was a genius or a terrible writer.
the question that every writer secretly has about themselves.
exactly.
this is making me too anxious to continue writing this interview.
good thing too, emily might get upset if we hijack her blog for any longer.
any last words?
palimpest, flabbergast, lilliputian.

***any reader with an interest in being asked strange questions is invited to email bird.yonder@gmail.com.