“In short words, the reason I went to college was because I found that the more I learned, the bigger my world got, and I wanted my world to be the biggest it could be.”

Monday evening we arrived at my grandpa and grandma’s house in Minnesota.  I hadn’t seen my mother’s parents for six years. In those six years I have become quite fascinated with my Grandpa’s life. 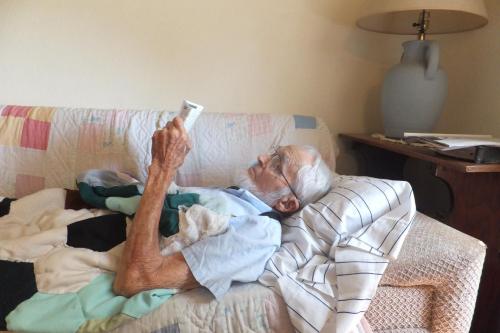 Grandpa lying down for a nap, reading himself to sleep just as I do.

As an Amish boy, Grandpa decided to go to college, and got his master’s degree. He remained Amish, and at the time was the only person ever to get a college degree and remain Amish. Since then there have been a few others, but there are still only a handful of people who have accomplished this.

Right now Grandpa is ninety-five and as sharp as ever. He is currently working on his memoirs, writing about the days he spent in Paraguay after WW2, helping Russian Mennonite refugees who were relocating to that area.

Needless to say, I was anxious to ask him about some of these things. Unfortunately he’s kind of hard of hearing, being ninety-five and all. But when I asked him why he went to college, he said the opening quote, which also sums up why I am in college. 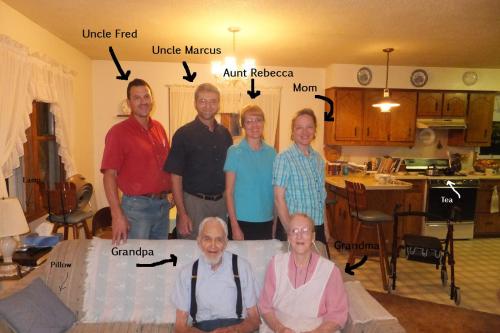 Grandpa, Grandma, and four of their children

The first order of business was to introduce Grandpa and Grandma to Justice, their first great-grandchild. This was such an iconic family moment that every camera on the premises was flashing in their faces. Paparazzi jokes were made.

Of course we all gathered around the living room and chatted. 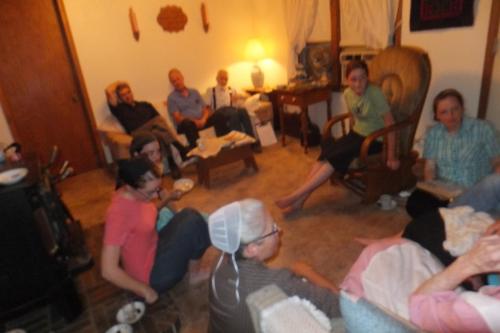 Yes, I know the picture is blurry, but it was the best I could find. I am stealing pictures from everyone’s cameras to do these blog posts, and I’m not really sure who took which pictures.

I found a whole bunch of pictures of feet, which I presume Fred took, as it seems like something he would do. This picture cracks me up because between Jenny and I there are three feet, and the middle one looks like it could belong to either of us.

The top half. I have tea. Does Jenny want it? Hmm.

Early Tuesday morning Amy, Dad, and Aunt Rebecca flew to their respective homes. Jenny, Mom, and I made applesauce for Grandma.

Wednesday, aka today, was the funeral of Susannah, the grandmother of Annette and Janet on their mother’s side. Mark and Janet cut their honeymoon short in order to come to the funeral, and it appears that since their wedding, both of them got sick with terrible colds. 😦

(I just realized that the above paragraph sounds like some of the stuff I read in my grandparent’s copy of The Budget. Wow. Okay, moving on.)

Mom, Jenny and I babysat baby Justice while Annette was at the funeral. I feel like an aunt to that child, not only because I changed his diapers, but because I have a weird urge to post millions of pictures of him on my blog.

But no, I’ll resist that urge.

Never mind. I wrote this up on Wednesday, as we were driving, but I couldn’t get both an internet connection and a charged computer battery at the same time and so I never posted it.

Here is a brief summery of how the drive home went:

The end. See you some other day when I have things to post about besides driving.