If you know anything about my family, you’ll know how long we’ve waited for this. There are six of us siblings, ranging in age from 21-34, and last Sunday was the first-ever wedding in our family.

We used to muse about which of us siblings would manage to get married first, and we all had different ideas. As time went on, we began to feel like it literally could be any of us. Jenny, the youngest, was technically old enough to get married before Matt even met Phoebe. But in the end it was still Matt, the oldest, who married first.

Matt and Phoebe had a unique love story (which Mom wrote about on her blog). And they are both unique people. So perhaps it’s fitting that they had a unique wedding as well. When COVID hit, they had no idea what things would look like in June. How many people would they even be allowed to invite? How would they decide which aunts and uncles could come, and which to leave out?

So instead of a traditional wedding, they decided to plan a drive-in wedding. The parents of one of Phoebe’s bridesmaids had a small field behind their house that they weren’t using, and they were able to construct a small platform for them to get married on so that everyone in their cars could see them properly. 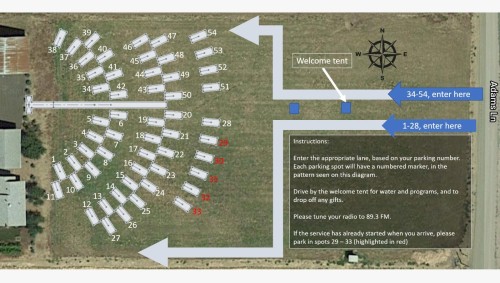 Matt made this parking diagram and emailed it to everyone who was coming to the wedding, along with a parking number.

Although we’d discuss wedding logistics every time Matt and Phoebe came over, and although we had a lot of cleaning and yard work projects around the house to do in preparation, the whole thing felt pretty low-key to me, and not super stressful. With Covid and such, there were a lot of us around to get stuff done.

Mom sewed new dresses for herself and Jenny, Amy re-purposed a nice dress she’d worn to a different wedding, and I pulled out a vintage dress I’d gotten for $3 at a thrift store. I had to modify it to make it fit me properly, and sew a lining for it, and of course sew a coordinating mask. But in the end we all had nice wedding clothes that coordinated with the wedding colors even though we weren’t in the bridal party. Our brothers were, and we wanted to coordinate for family pictures.

The first major hurdle in the wedding preparation was the weather. Oregon weather is a whole thing. We have these dry, sunny summers that are perfect for weddings, but June is still an iffy month. Sometimes it rains in June, and when we get rainy weather in Oregon, it’s not like, an hour of rainy weather, it’s a week of rainy weather.

And we hit a spell of cold, rainy weather over the time of the wedding.

In non-Covid times it wouldn’t have been such a big deal, but we were trying very hard to still keep things safe and healthy. We’ve had a rule for the past few months that we don’t allow anyone who doesn’t live in the house to enter our house, except to use the bathroom. Even for our Sunday dinners, Matt, Phoebe, and Ben always stayed outside.

But we had family coming from out of state, and we wanted to hang out with them. In the end, since not nearly everyone who wanted to come was able to, we decided to relax that rule. Our relatives all got their own hotels, but since there were only five of them, we let them in the house during the day.

My Uncle Marcus and Aunt Anna arrived Saturday morning, but we barely got to spend time with them before we had to rush off to the rehearsal. We arrived and got briefed on our duties: Amy would take pictures of everyone in their cars in lieu of a guest book, and Jenny and I would be at the welcome tent, handing out water and programs, and taking gifts. 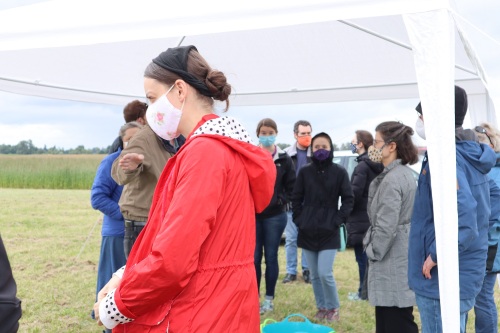 I should note that Amy was using my camera (which I bought to film YouTube videos), and I asked her to snap some pictures for my blog. So most of the pictures in this post were taken by her.

This was the first time we’d seen the venue, so we wandered around looking at the setup. 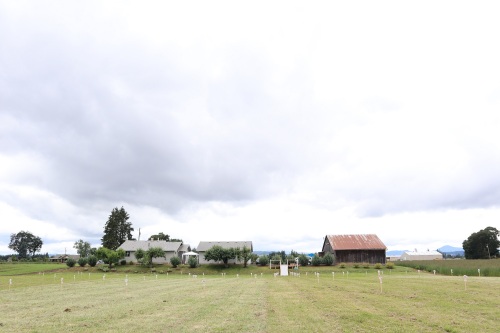 The parking spaces were marked with stakes and numbered cardboard hearts, covered in plastic to protect them from the drizzle. 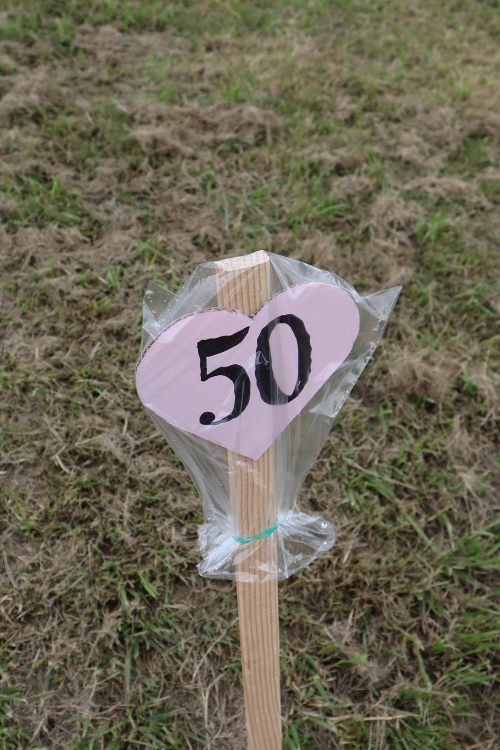 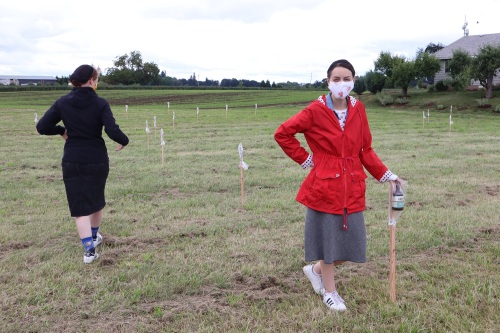 The aisle was also marked with stakes, and there were kombucha-bottle vases glued to them. 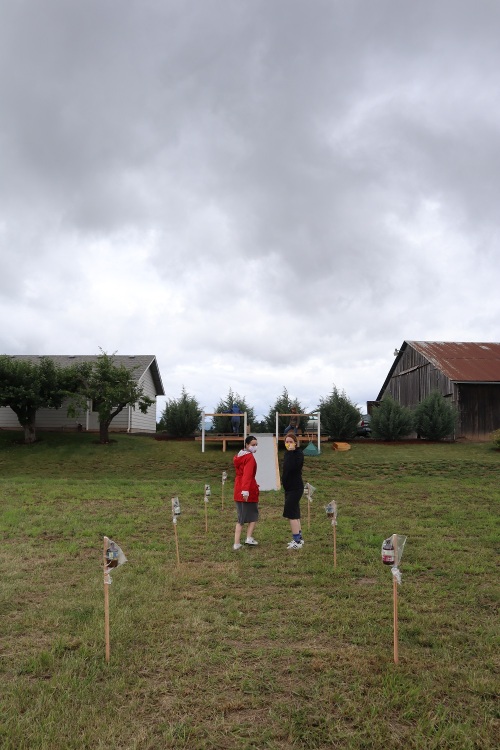 Again, everything felt so low-key and relaxed to me. There just wasn’t much to help with. It was too early to do the flowers. Finally Elaine, Phoebe’s mom, told us we could attach garlands to the platform to make it look pretty. 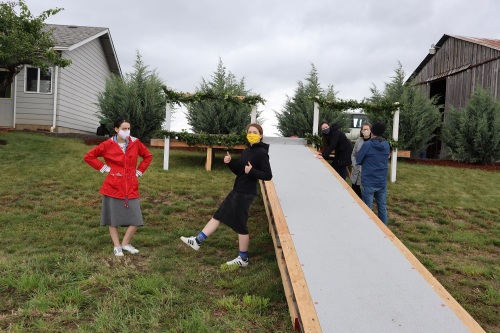 After that we went home, ate lunch, rested a bit, and then prepared for the rehearsal dinner. That was a challenge. We’d planned to just have it in our yard, but it was much too cold and wet for that. So Dad cleared out a space in one of his three-sided storage buildings over at the warehouse, and we rented outdoor space heaters, and made it work.

My Uncle Rod, Aunt Rebecca, and cousin Jason arrived from out of state, just in time for dinner. 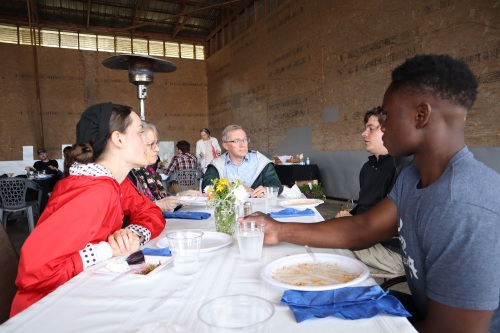 Catching up with our uncle and aunt.

Matt and Phoebe didn’t want to have an open mic at their wedding. Matt’s best man, Justin Doutrich, and I were each going to give a toast, but that was it. So we had an open mic time at the rehearsal dinner instead.

Phoebe’s sisters and other bridesmaids kept talking about the early days of Matt and Phoebe’s relationship, and what it was like from their angle. All the lengthy letters and phone calls from Phoebe, detailing her dates with Matt, before they were officially boyfriend and girlfriend. Down to the tiniest detail, like his crusts.

“His crusts?” Someone asked. “What was with his crusts?”

Apparently Matt had, on one of the first dates, cut the crusts off of his bread and not eaten them. And Phoebe didn’t know what to make of a man in his 30s who didn’t eat his crusts.

I was so jealous of Phoebe’s friends. Here they knew all the tiniest details of those early dates, down to Matt’s bread crusts, and we on Matt’s side of the family knew nothing. They’d gone out, we knew, and they were going out again. We were on pins and needles for details. What had Matt thought of her? What was she like? What was he thinking?

We couldn’t seem to get any info from Matt. Finally he told us that they’d spent three hours together at the Air and Space Museum, and we latched onto that and discussed it for ages around the kitchen table, clutching our cups of rooibos tea. Any girl who could spend three hours at the Air and Space Museum with Matt had to be a keeper, right? That had to mean something, right?

It was so funny to remember that era, two years ago, and how desperately we wanted a Happily Ever After for Matt. And now, here we were.

Daylight began to fade, and it grew colder. We began to pack everything back up and go home. I was completely exhausted, and thought I might go to bed early. It was so bizarre, being with people and doing things again after three months of isolation.

But then I went downstairs for a snack, and saw Matt in the living room at his computer. “How are you feeling?” I asked him.

Turns out he was frustrated and stressed. This process, which had seemed low-key from my angle, was not low-key from his. There were so many random last minute details he had to fix. The detailed parking diagram had taken up so much of his time, and now he couldn’t seem to get it printed to hand to the parking attendants. He’d had to go rushing back to the venue, because the tents had blown over. And he’d had no end of trouble scanning pictures for the slideshow.

“Wait, you didn’t make the slideshow yet?” I asked him.

“No, I’ll try to figure it out tonight if I have time.”

So of course I volunteered to make the slideshow for him. It actually took a while. Matt had no idea what music he wanted, and the only music I could find on my computer was some random country stuff from the ’00s that I’d copied from Matt’s computer over a decade ago. I finally found a halfway decent song, but then the video editing software I had on my computer was not designed for slideshows. It made me miss Windows Movie Maker.

I finally finished, uploaded it to YouTube, and went to bed around 12:45 am. Here it is, if you feel like seeing a load of cute pictures.

I felt like I barely got any sleep before I had to be up, washing my hair, and ironing my dress for the big day. But it really wasn’t so bad, when compared to Matt. He got only an hour or so, tossing and turning as parking diagrams spun round and round in his head.

P.S. I changed my comment settings, so now all comments must be approved by me before they’ll show up. So if your comments don’t show up right away after you post them, that’s why! Just wait a bit and it should get approved shortly.