Here in Oregon, fake spring is well underway. The wetness is peppered with a few mild days. The daffodils bloomed at the end of January–the earliest I’ve ever seen them. And the camellias too, of course. The flowering plum blossoms will be next.

Despite this, precedent tells me that we still have over a month of unrelenting cold wetness before real spring arrives.

I’ve spent the majority of my life trying very hard to like February. And to think that Valentine’s Day is a wonderful holiday. And to make myself believe that spring is really here. But I’m just over it. February has consistently been the absolute worst month of the entire year for me, and I’ve resigned myself to the fact that its only redeeming quality is its semi-consistent shortness of length.

I’ve neglected this blog dreadfully. If my rant about February didn’t give it away, I’ve got a touch of SAD. And I’m all-consumed by my book, at this point. Every time I sit down to blog I feel guilty that I’m not working on it.

Here’s a timeline of my book progress, just in case any of you are curious about how these things go.

September, 2018: I started traveling, living in a different community every month. I thought I’d eventually write a book about the experience.

March, 2019: I decided to start writing the book. I wrote only 500 words of rough draft a day, so I wouldn’t get overwhelmed.

June, 2019: I finished my trip, and went back to Oregon for the summer.

July, 2019: I got really close to the end of my first draft, and I was tired of it, so I started on the second draft.

August, 2019: I sent the first chapter of my second draft to my editor, Janessa, for a sample edit.

Quick Note: It’s hard to stress enough how different the first and second drafts are. The first draft is equivalent to a pile of sand in a sandbox, while the second draft looks like a sandcastle, even if it doesn’t quite look like the sandcastle it will eventually become. If you read my second draft it would sound like a book. My first draft wouldn’t.

September, 2019: My Grandpa died. I decided to write about this in my book too, and make it a 365-day year instead of a September-June year. This meant that I need two more chapters for my book, and I hadn’t even written first drafts for them yet. Nevertheless, I continued with my second draft.

September-December: I completed the second drafts of the first 4 1/2 chapters, but things kept happening to shove book-writing to the back burner. I went to Minnesota to help care for Grandpa before he died. I did some substitute teaching. I did line edits for Deborah Miller’s book. I wrote and directed the school Christmas play.

January 2020: I realized with a jolt that in order to give Janessa ample time to edit my book before she has her baby in March, I needed to get my rear in gear. I completed the second drafts for 5 1/2 more chapters.

February 2020: Three chapters to go! Unfortunately, these are the three chapters that I never completed first drafts for. I’d like to think that at this point I could just bang out a decent-enough draft on the first try, but I don’t seem to have that particular talent.

As  you can see, this single-minded focus on book finishing has resulted in almost nonexistent blog posts for both January and February. Oops.

However, I promised my Patreon subscribers that I’d update at least once a month, hopefully twice a month. So the very end of January saw me banging out an extremely personal post about decisions I made regarding my church and my future.

The response was amazing. I had so many people leaving kind comments or privately messaging me. When I started my Patreon last year I felt kind-of strange about it, but it’s become such a blessing in my life. It’s created a safe community for me to share, not just my strong opinions, but also what’s deep inside my heart.

The other day I discovered that when people unsubscribe from my Patreon, they can leave a little anonymous message saying why they left. Almost all of them were pretty much what I expected: people had tried it, and decided it wasn’t something they wanted on an ongoing basis. That’s cool. I get that.

But one person told me that they left because I have a cynical view of Mennonites, and that got under my thin skin just a bit. Made me feel defensive. I’m not cynical about Mennonites! I defend Mennonites all the time! And I’m still Mennonite, and literally wrote a whole post about feeling a need to own and repent of the bad things in our culture instead of trying to prove that I’m “not one of the bad Mennonites.”

Upon reflection, however, that’s the beauty of charging people to read your work. You can be so much more vulnerable about how you really feel, because if people don’t like it, they won’t continue to pay for it. The person who thought I was cynical about Mennonites will no longer be able to read my personal thoughts.

(If you’re interested in becoming a Patreon supporter, you can go to Patreon.com/emilysmucker and sign up. It costs $1 per month, but if you’d like to offer more support than that you can edit the amount you give per month.)

Sometimes people ask me what my plans for the future are. I mean, they wonder if I’m in Oregon long-term now, or if I’m going to move to one of the places I visited on my trip, or what.

To be honest, I have no clue. My big focus, for now, is getting my book-writing career off the ground.

This afternoon I took a break from writing, and went around the property spraying blackberry vines. Flowers are popping up everywhere. Sometimes we still have sunny days in February. 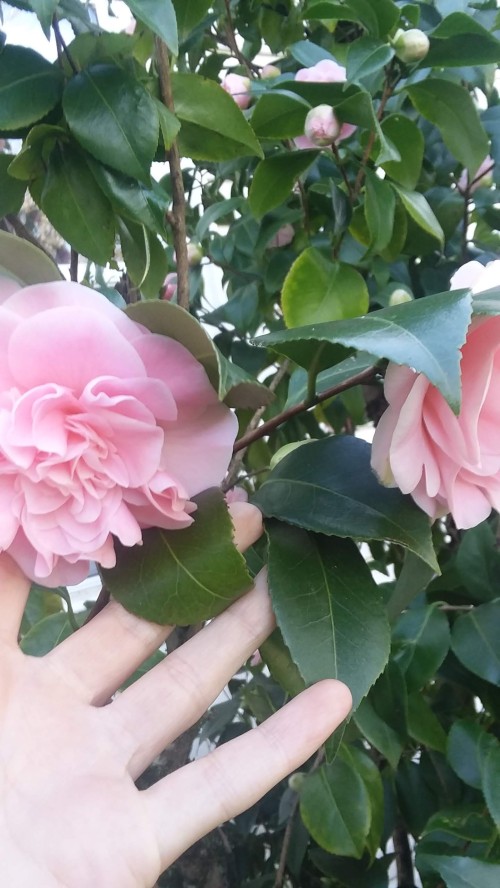 Mom and I are going to the coast this week, to really focus on our writing projects. It’s supposed to be sunny! I can’t wait.

I’m trying to be more deliberate about beating the winter blues. Hence the trip to the coast. I know I need to get outside more and get more exercise, which is easier said than done. But I did start a “gratitude journal” of sorts. (I mean writing down, on a calendar, a few things I’m grateful for every day.)

Do you have any tips for fighting SAD and/or the winter blues? If so I’d love to hear them!

Take care, and hopefully I’ll get back into the swing of blogging soon.