The Fantastic Puns of Teenagers

One of the highlights of my job is that, now and then, one of the students will effortlessly spit out a truly fantastic pun.

Here are some of my favorites.

The first occurred some months ago, when Mr B and Ms Shea took all the honor roll students on a delightful honor roll trip, and lucky me had to stay behind with the seven unfortunate souls who didn’t make honor roll.

This had its cons (they couldn’t seem to stay put in their desks) and its pros (there was a live Christmas tree in the classroom, because a student had randomly won it from a radio station on the way to school, but that’s another story for another day). In essence, I survived.

After lunch, the students begged to play “Occupations.” To play this game, each student writes down the name of an occupation, such as “dentist” or “writer,” and gives it to the teacher. The teacher then reads the list of occupations, and each student tries to guess what occupations the other students submitted.

“No. Logan, are you firefighter?”

After playing this game many times, we’ve begun to have them list other things, such as types of cheese, or cartoon characters, instead of actual occupations. So on this December day, I decided to try my hand at a funny yet festive theme. “Sure, we can play occupations,” I said. “Let’s do, ‘gifts you would give your grandma.'”

They gave me their gift ideas, I read them off, and they began.

At one juncture Cameron turned to Zane. “Are you adult diapers?”

Fantastic pun #2 appeared more recently, when spring began to tease us, and someone brought a fresh bouquet of daffodils into the classroom. Their scent filled the room.

“Wow, those are strong,” Mr B said, coming in after break.

“What are?” Bryant wanted to know.

Bryant scoffed. “I bet I could break them.”

(This was particularly funny to me because it was the first time I had ever, to my memory, heard Bryant tell a joke.)

The final pun happened a week or two ago.

This Monday our students will head to the ACE Regional Student Convention, and I’ve been up to my ears in preparation. Thankfully a former student, Janane, volunteered to do most of the convention prep, but I ended up heavily involved in the one act play.

First I wrote the play. Then one of the male participants dropped out, so I re-wrote a male part into a female part. Then I spent quite a bit of time with paintbrushes and PVC, trying to construct a set. Then the other male student wanted to drop out, and I told him he couldn’t unless he found another male to take his place (ACE has strict rules about people sticking to their gender in plays) so he bribed one of his buddies with two weeks of lunch trades. 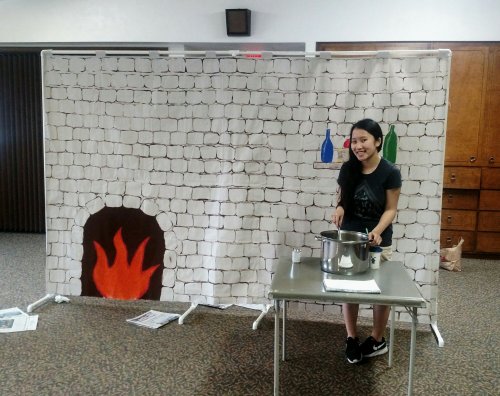 Janane in front of the backdrop we made.

So anyway. What with one thing and another, the actual act of practicing the play was falling by the wayside. Lines were hastily memorized. I borrowed things from the kitchen to stand in for props we didn’t have yet. And we practiced that play.

Aubrey, as Martha, was stirring a huge stew pot while Mary sat at Jesus feet in front of a fireplace of canvas and tempera paint. Jesus said his line. Mary said her line. Now it was Martha’s turn, but Aubrey wasn’t saying anything.

Aubrey stopped stirring, reached into her stew pot, and pulled out her script. “Sorry,” she said. “I mixed up my lines.”

What a funny bunch.

3 responses to “The Fantastic Puns of Teenagers”