What Goes Wrong Where I Work 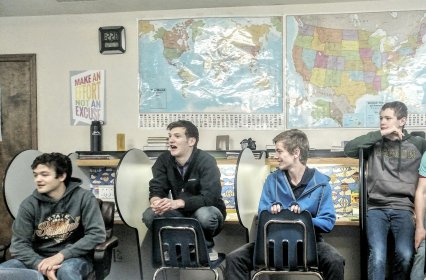 Of course the first comment on my last post asked me, “So, where YOU work, what is likely to go wrong?”

I should have anticipated that this question might come up. I was basically asking for it. But I still have avoided writing this blog post because in order to say what goes wrong where I work I have to first explain where I work, and my job is enough of a cobbled-together position that it’s hard to explain.

We’re an ACE school, so my “teaching” consists of helping out in the classroom once a week, as well as substitute teaching when necessary. I’m also in charge of two courses that sometimes require me to teach in the traditional sense, but are mostly writing-based, so I usually “teach” by meeting one-on-one with the students.

If you have ever been involved in a small Christian church school, I am sure you can easily envision this type of position. If not, I’m kind-of sorry if you’re still confused, but I am tired of trying to explain.

Actually, that could be thing-that-goes-wrong #1. I have a hard time explaining my job to those who have no concept of the small Christian church school.

So, thing #2, and this is probably the main one: I’m the one who hears the most about things that are going wrong, but has the least power to fix them.

Well, except for the time I told the students not to wear t-shirts after the school Christmas Program. The school handbook said the students were to wear white button-down shirts to the Christmas Program, but I didn’t see any reason for them to wear button-down shirts under their costumes. So, thinking I was being cool and reasonable, I told them they could wear t-shirts under their costumes. But I didn’t like the idea of them wearing grubby t-shirts after the program, when everyone was eating refreshments, so I told them they could bring nicer shirts to wear afterwords. Maybe a polo or something.

Unfortunately, unbeknownst to me, it is totally in vogue for high school students of today to bring grubby t-shirts to Christmas Programs, just so they can change out of their fancy duds the instant the program is over. And I, the evil secretary, had just upset their plans.

That was the one time I was the center of drama. Instead, people usually complain to me when they’re upset at someone else. Which is fine. I’ll lend an empathetic ear. But it’s frustrating because there is usually very little I can actually do to help.

Okay, things that go wrong #3: I have an inconsistent schedule, but everyone else is on a very rigid schedule that I have to work around. And sometimes the people I help are on different schedules from each other.

Basically, grades 1-6 are on a completely different schedule from grades 7-12. The only time they kind-of overlap is at lunch, but even then, the older students are supposed to be finished eating and out on break by the time the younger students come out to the lunch room.

Last Monday, a friend of mine convinced me that the reason I’ve been so sick is because I don’t eat enough raw veggies. She suggested I bring salads for lunch. So, on Tuesday, I brought a salad for lunch.

It barely made a dent in my hunger.

Wednesday I brought an even bigger salad. It still didn’t fill me up.

I took out a plate and prepared my salad. It was a HUGE salad. The whole plate was heaped with kale and lettuce and parsley and avocado and beans and cheese. I began eating.

It took forever to chow the whole thing down. Have you ever tried eating a heaping plate of kale salad? I wouldn’t necessarily recommend it, unless you like chewing and chewing for 20 minutes and not ever feeling full.

I mean, I feel healthier though I guess.

So. If you ever want to write a book about someone who had a job like mine, you can make them have a hard time explaining their job, and everyone can come to them to complain, and they can have strange scheduling conflicts that result in them not having enough time to eat their salad.

And everyone will think you know what you’re talking about.

This entry was posted in Random, Thoughts About Life. Bookmark the permalink.

4 responses to “What Goes Wrong Where I Work”