The Blue T-shirt (and other tales from the fair)

I was bending over the serger, trying to make a magenta button-down shirt smaller. I wanted to wear it to the fair, so that I would look classy and people would buy lots of books.

Oh great. I hurried to get ready.

But we made it in time anyway. And it was hot.

All the Authors were crammed behind this table in a room with a glass roof. It got hotter and hotter. And it was a slow day. We had wanted to be there on Senior day, which is always Wednesday and never slow. But for some reason they changed Senior day to Thursday so we were kind of sunk.

My magenta shirt stuck to me. It was wet in various places. I could hardly stand it. So I went into the bathroom, tried to dry my shirt out by shaking it around, and leaned against the cool tile wall.

When I was done went and washed my hands, and then I opened the door to walk out. Lo and behold, I was staring into a broom closet.

On the way I found a booth that sold these amazing bags from India. I admired them, but didn’t buy any.

Carola Dunn, who wrote murder mysteries, had a British accent, and was probably the most interesting author there, had this really pretty folding fan. Later I was told that they sold fans like that at the same booth with the amazing bags from India, so I bought a couple. But by then it was cooling off some.

Anyway, so I fanned myself and drank water and tried to stay cool, but it wasn’t working. My shirt was too tight.

“I just wish I had a baggy t-shirt to wear,” I said in frustration.

“You know,” said Mom, “I think there was a booth that was giving away free t-shirts.”

So she went running off to see if she could get me a free t-shirt. When she came back she was holding a large blue thing. “The only size they had is extra large,” she said with a laugh.

I wore it anyway, and it made a world of difference. I could stand the heat after that.

It says Talecris Plasma Resources on the front and on the back it says DONORS ROCK!! with a big white guitar and an orange splash.

When I got home I made it into a dress and felt very creative. 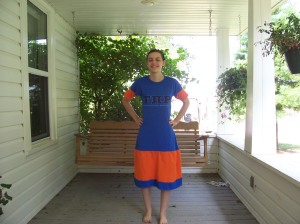 That is the story of the big blue t-shirt.

The rest of the story of the fair is, I sold 18 books. It seemed like nothing after sitting in the heat for 6 hours but when I told the guy next to me how many I had sold he was amazed, so I guess I did OK.

But even not counting the books and despite the heat it was a lovely experience, chatting with the other authors, taking breaks to go look through booths, people watching, blue t-shirts…